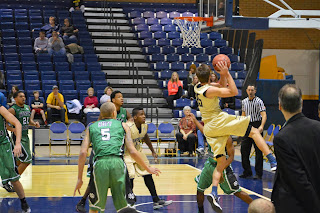 Northern Colorado has had an impressive season so far, knocking off Kansas State on the road, and giving New Mexico State and Colorado State all they could handle on the road. But their most impressive game of the season came on Sunday in the Big Sky opener, as they took down North Dakota 84-66.

It was an impressive effort that saw UNC take care of business in all facets of the game. They shot 60% from the floor while holding UND to 39% shooting. They outrebounded UND by 16. At one point in the first half, they turned an 11-7 deficit into a 32-11 lead thanks to a 25-0 run. Their gameplan was sound, and they executed it perfectly.

North Dakota came into the game allowing opponents to shoot 57% on two-pointers, and they showed today that was not a fluke. They constantly took chances defensively (and to their credit, they did force 20 turnovers), but when they didn't cause a steal, it would often result in open lanes for the Bears, who got a ton of easy looks. At times, North Dakota looked hopeless on help defense, and guys would drive from the three-point line all the way in for an open layup, which simply shouldn't happen. The Bears shot 22/36 inside the arc.

On the contrary, Northern Colorado played excellent defense all day, holding the powerful duo of Aaron Anderson and Troy Huff to 20 points on 5/21 FG. They switched all ball screens, which is a luxury BJ Hill has with big men as agile as Derrick Barden and Dominique Lee, who were both outstanding. North Dakota got some open looks outside, but they are at their best when they are able to attack the rim and score in transition, and the Bears packed things in so that UND wasn't able to get to the rim often. It was a great defensive performance, and at times UND simply had no answers in the half-court offense.

Another nice thing that UNC showed was a three-quarter court trapping press, similar to one that Montana uses. While they didn't really force a lot of turnovers, it really slowed North Dakota down and made them take a lot of time to get into their sets. 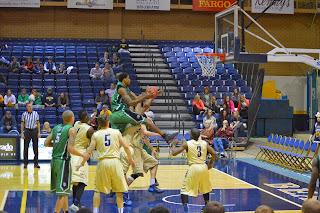 Derrick Barden was the star of the day, with 18 points and 14 rebounds, five of them offensive. He made great decisions all day, and was just relentless on the glass, as always. A guy his size should not be able to rebound the way that he does, but he is a special player at the Big Sky level.

One bright spot for North Dakota was the play of Jaron Nash, who consistently finished well at the rim, as he was able to create angles using his athleticism. He finished with 22 points on 10/14 shooting.