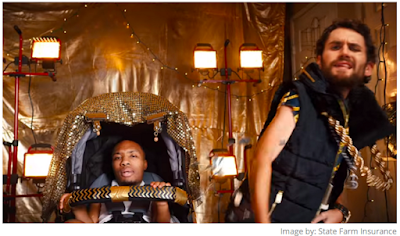 (side note: On a scale of 1-10 how bad are the State Farm commercials depicting Chris Paul as "dad," DeAndre Jordan as "mom," Kevin Garnett as "grandpa," Kevin Love as a "brother" and Damian Lillard as a "baby?"

1-They're kinda funny, Kyle. Don't overreact to a Fortune 500 company thinking it's a good idea to turn Jordan, a 6-foot-11, 27-year-old center, into the housewife of Chris Paul, a moody, 30-year-old point guard.

10-They're awful. Exactly how much did State Farm pay Kevin Love for him to acquiesce to the idea of taking his bearded face and placing it on the body of a 10 year old? Every player involved in the commercials, with the exception of Lillard, should be forced to retire from the league immediately.

From the Idaho State Journal ... Court Confessional: ISU's stadium quandry limiting success? ... the Bengals have two different home arenas (kind of) and neither is the perfect solution.

The Grizzlies have received their first commitment for the 2017 recruiting class, a 6-2 guard from Dublin, California.