In the video above, Newlee explained why he was upset with fans from Idaho State.

And here's a screen grab of Tingey's Tweet that has since been deleted. 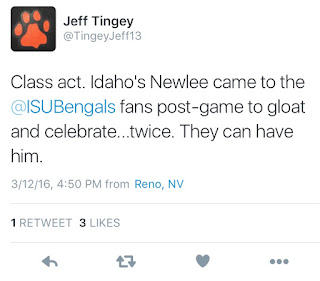 For some additional background on Newlee's history with Idaho State, he is the school's second-winningest women's basketball coach with  93 career victories. Newlee was in Pocatello from 2002-07 and went 54-34 in the Big Sky Conference. He led the program to a conference tournament championship in 2007. Following the 2007-08 season and a berth in the WNIT, Newlee left ISU for Idaho.
Posted by Kyle Franko at 3:33 PM