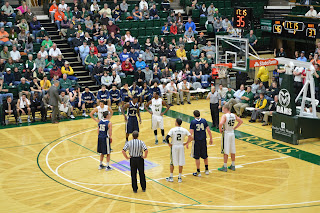 Like Montana before them, Northern Colorado will be glad that there are no Colton Iverson's in the Big Sky.

Iverson had 18 points and 13 rebounds for Colorado State, as the Bears just simply didn't have an answer for him down low. Defensively, UNC was having trouble stopping anyone on the CSU squad. The Rams shot 54% from the field, and made 21/23 free throws, winning the game through offensive talent.

When Iverson got the ball down low, the Bears had nobody that could body him up, and he was able to get short jump hooks whenever he was single teamed, as he shot 7/8 from the floor. When the Bears brought a double team, he would kick it out, and UNC was having trouble in their rotations getting to the open shooter. This helped guys like Wes Eikmeier (17 points) and Dorian Green (19 points, 7 assists) have big nights.

In my keys for Northern Colorado, I said they would need to take care of the ball, rebound the ball, and hit their outside shots. They took care of the ball as well as they have all year (8 turnovers), and rebounded fairly well (it helped that Pierce Hornung missed the game, but they had been outrebounded just 16-14 at halftime, and 38-28 for the game). However, they couldn't get their shots to fall consistently, which had a lot to do with a very good Rams defense. The Bears finished 5/19 from downtown.

At times Northern Colorado struggled to be patient in their offense, with Tim Huskisson being a key offender, as he shot a couple of quick threes that drew the ire of head coach BJ Hill. Still, he is an impressive player and had an impressive game with ten points and seven rebounds. He had a nice bucket off the dribble, and an athletically impressive putback jump after a Tate Unruh miss. He also had a sweet block defensively. I have said for the past year he is such a key guy for the Bears, because physically he is capable of doing some things that nobody else on the team can do. 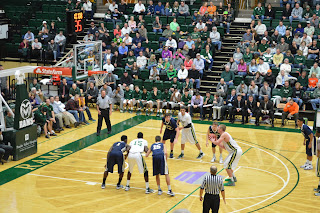 Derrick Barden, though, is another guy that adds that athleticism that was missing a bit last year. He had 13 points and three rebounds, and showed good quickness on both ends. I suspect his numbers will improve a lot during conference play, because small four men fare better there than against seven footers like Iverson. Barden had a steal up top and took it up for a dunk (he was fouled on the attempt), which is a play that maybe only a handful of guys in the conference can do, or even think about attempting.

One guy that I think has to be frustrating for the UNC coaching staff is Emmanuel Addo. When you watch him, there are times when you think he can be the best offensive post player in the conference, and potentially an all-conference player. He can step back and hit a three, has a solid midrange shot, a nice baby hook, and can even take you off the dribble. He should average 15 a night. At the same time, he can be a bit of a lazy defender and rebounder, and I am sure this cuts into his minutes. On one drive he failed to box out his man on a free throw attempt. Another team he didn't really seem to have the awareness to step in and help out when a Ram was driving to the hoop, and was far too late to provide any help at all. His potential is tantalizing though.

One guy that did impress me on the defensive end was guard James Davis, who is a really good on the ball defender. That was something they lacked last year after the departure of Elliott Lloyd, so he adds a nice element to the team.

One last player note... I liked what I saw out of Tate Unruh. He had 13 points on just 4/12 shooting, but he was very aggressive, and UNC ran plays designed to get him looks. He has a great stroke, and the Bears offense will be good if he can get 10 shots per game. Again, the 4/12 isn't as big of a concern because UNC will not play more frontlines like CSU's.

I came away impressed with Northern Colorado's fight in this game, as they often outhustled CSU, whose best attribute is possibly their tenacity. Coach Larry Eustachy of CSU also came away very impressed, saying he thought Northern Colorado was better than Montana, and that he could see them winning the Big Sky. It was a defeat for the Bears, but also gave them some good things to build on.