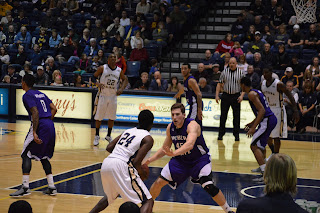 In Jeff Goodman's updated transfer list, there are some more high profile names transferring out of the Big Sky. Unfortunately for Northern Colorado, they are losing three players, including two that were major parts of their rotation last year.

Forward Emmanuel Addo, guard Paul Garnica, and forward Bryce Douvier will all be transferring. Per Goodman, Addo will be eligible to play immediately.

Addo's transfer is not all that surprising since he took a bit of a step back in his junior season. Here is how it looks by the numbers:

He looked for much of the year like he was playing a bit tentatively, and without full confidence. But, there has never been any denying his talent. He has a varied offensive skill set, with the ability to knock down threes or score in the post. If he finds the right situation, he can be a really good big man for a mid-major team. It looks like he will not be short for suitors.

He is a good kid, and I think he probably felt like if he hadn't reached his potential yet at Northern Colorado by now, it wasn't going to happen in his senior year. I hope he finds a lot of success at his next step. It hurts the Bears because he was their first big man off of the bench. With him gone, they have to hope and pray that either Brendan Keane takes a big step (not sure how likely) or that Cody McDavis makes a big leap between his first and second years.

Paul Garnica was a bit of an enigma. He has big-time talent, but I think the coaches seemed to be maddened by some inconsistency, and it showed in his minutes. He had a tendency to go for the flashy play rather than the solid play, and that happened on both ends of the court. Like Addo, he took a step back in minutes in his junior year, and probably saw that there was the chance his minutes could shrink more, with the addition of Jordan Wilson.

Garnica has a big high school resume, and is a very talented player, so I have to imagine he will catch on. He has deep range on his jump shot (two years ago he shot 48.5% from three, last year he was at 42.3%), and the ability to get out in transition. His loss means there will be no experienced alternative for Tevin Svihovec, and that is a bit scary for UNC fans.

Bryce Douvier was a rotational big man who I do not believe was on scholarship. He always gave them great effort, and could help out as needed. He played seven minutes per game last year, and made 20/31 shots, showing he didn't try to do too much. While it is not a huge loss on the court, it is a loss, especially with some depth issues in the frontcourt.

What does this do to Northern Colorado's chances next year? Thoughts?