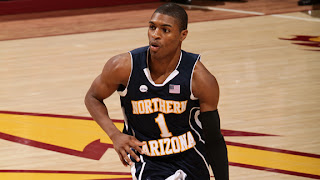 It was a rough season for Northern Arizona. Their best player missed a lot of the year due to injury, their head-coach resigned/got fired, and they lost their final 16 games en route to a last place, 5-24 (1-15) finish in the Big Sky. One of the bright spots was true freshman James Douglas, who led the team in scoring with 11.8 points per game. However, following the coaching change, he has decided to transfer from the school.

His efficiency stats do not look good, but I think that was more of a function of the fact that he was the focal point of the offense and main facilitator of the offense, which is a big role for a true freshman. He shot 44% from two-point rang,e and 38% from downtown. He made 74% of his free throws, but he was not great at getting to the line.

He did show nice athleticism going to the hoop, and that combined with a nice outside shot gave you the feeling that he could have had the chance to lead the Big Sky in scoring at some point in his career. His talent level was that good.

He was not a great creator yet, but he could get some open shots for teammates. He had a 17.7 assist rate (2.2 assists per game), but he was certainly a scoring point guard first. He had 35 steals on the season, and that number could have gone up with more seasoning and coaching.

James Douglas was one of the most promising young players in the conference last year, and it was between him and Dylan Garrity for freshman of the year... unfortunately, we will not get to see his career progress in the Big Sky, since he will be moving on.