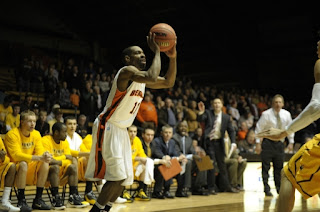 During Idaho State's magical run in the middle of the season, it was Kenny McGowen that seemed to hit clutch shot after clutch shot. He hit game-winning shots in multiple games, and had a game of 37 points this year (and a couple games with 30+ points).

So why isn't he higher on this list? Well, when he was hot, he was as dangerous almost as anyone in the conference. When he wasn't shooting well, he appeared to be a bit more of a reckless gunner. He shot 32.5% from downtown, but took nearly seven of them per game. He was not too bad at getting to the line, and shot a nice percentage from there. But his game was clearly predicated on shooting threes (and interim coach Deane Martin gave him the green light), but sometimes that meant he was not effective if the shots weren't falling.

He didn't impact the game in a big way getting others involved, was not a great defensive player, and he did not help on the glass. That was not what he was asked to do. I try to look at a guy irrespective of what team they're on, and in that light I think McGowen doesn't stand out quite as much as some others. On ISU, a team without a ton of scorers, he got the green light whenever he wanted, and at times this made him look like a star. But other times, he simply didn't impact the game quite enough.

A team will always miss a guy with the ability to heat up like McGowen, and someone that was never afraid of the moment. With his game-winner to beat Weber State, he had a hand in perhaps the most dramatic moment of the Big Sky season.