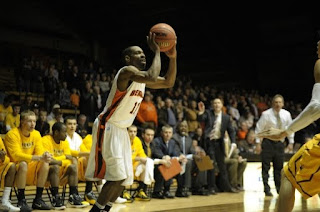 Within a week, Kenny McGowen has transformed from being a solid senior guard for Idaho State to a guy that the other team does not want to see with the ball in his hands late in the game.

Last Saturday he hit the buzzer beater to shock Weber State, and on Thursday night against Montana State, he was up to it again.

In regulation, it was McGowen that drained a 27 footer with 15 seconds left to give ISU a 77-75 lead. On the ensuing possession, Rod Singleton found Tre Johnson for a dunk, tying the game and eventually sending it into overtime. In the extra frame, with the Bengals trailing 86-85, it was McGowen that drove to the lane and scored a reverse layup with 10.3 seconds left to give ISU the 87-86 lead.

Then, it was almost MSU's chance for magic:

The Bobcats got a desperation last chance at the win: an inbounds play under their own basket with one-tenth of a second left in the game. Sophomore forward Tre Johnson, whose dunk with 4.2 seconds left took the game into overtime, rose up for the inbounds pass and tapped it toward the rim.

The ball went towards the orange cylinder, arcing ever so slightly. Then the Bobcats' golden egg broke as the ball hit the back of the rim and bounded out, giving the Bengals an 87-86 victory.

It ended a wild game in Bozeman that saw Idaho State open up a 20 point lead in the first half, MSU crawl back to have a five-point lead with 2:48 to go in regulation, and lead by as many as four in overtime. It was a back-and-forth, thrilling game, which has become the norm for Idaho State recently.

McGowen led the Bengals with 30 points, including making 7/14 from downtown. Chase Grabau chipped in 16 points, while Abner Moreira had 14 and 7.

For the Bobcats, they struggled at the line (20/31) and in getting stops at key moments. But they did have some players make big plays. Xavier Blount led the team with 24 points and 8 rebounds, while Christian Moon chipped in 22 points (and 6 treys), as he was excellent in the second half. Tre Johnson (11 and 9) and Jourdain Allou (13 and 12) had their names called very often, as they were active throughout the game.

Montana State falls to 11-10 overall, 6-4 in the Big Sky, while Idaho State improbably improves to 8-14 overall, and also 6-4 overall. The team that everyone thought would finish at the bottom of the Big Sky (myself included), has now won four straight games, is tied for third in the conference, and has become must-see viewing for followers of the Big Sky.

Basketball sure is great.