Where Will Montana Get Frontcourt Production? 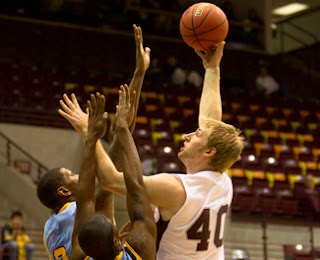 When the preseason polls come out, it is likely that Montana will be ranked first in both the coaches and media polls, even with Will Cherry missing the start of the season. It is understandable, because they were that good last year, and they do return a lot of talent.

However, the elephant in the room for them is this - where are they going to get frontcourt production?

On one hand, they were not a frontcourt dominated team last year. Their best post up player was probably their two guard, Kareem Jamar (which will be the case again this year), and their big men were not guys that would go down on the block. However, Derek Selvig (their starting five last year), added a bunch of production in many ways. Art Steward (their starting three), was a glue guy that did it all for the Grizzlies. I think these guys will be missed a little bit more than people think.

Mathias Ward is the returning frontcourt player for Montana. He is an outstanding player that averaged almost 11 points per game, and you could see him getting more comfortable as the season went along. He will be a major part of their offense. However, his game is as a jump shooter. He will not provide inside scoring.

Part of the frontcourt production was supposed to be taken care of by JUCO big man Marko Kovacevic, who averaged 12 and 8 last year in junior college. He looked like he could be the legitimate post threat that Montana did not have last year. However, he was ruled academically ineligible, and likely won't be able to play all season.

Who does that leave? Eric Hutchison is the most experienced, though he played just 7.2 minutes per game last year. He is a banger, and the Grizzlies hope he can provide tough defense and rebounding down low. Spencer Coleman is projected to start at the three, but there is word that he could play some smallball four as well. He will be a stud, and playing the four could provide them with their most talented lineup. Michael Weisner got a little time as well, but at a skinny 6'7'' might not hold up to the rigors of playing too much as a post player.

Then there are a couple of freshmen options. Andy Martin is a little more traditional as a big man, since he is a legit 7-footer, but he seems too raw to be a consistent threat. The more likely option could be Jake Wiley. Like Coleman, he is a bit of a hybrid 3/4 game, but he has a lot of potential because of his athletic abilities, especially on the defensive end.

There are lots of potential options, but nobody experienced that they know can rebound or score in the post. This is the biggest question mark for the Grizzlies heading into the season, even more than the loss of Cherry early in the year. How the young guys develop, and how Wayne Tinkle hashes out his rotation, will play big roles in whether or not Montana can repeat as Big Sky champions.

How do you guys see it shaking out?