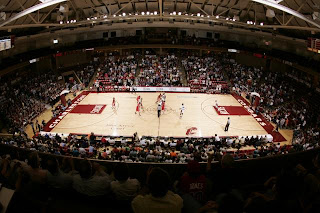 After checking out Weber State's schedule, it's time to look at Eastern Washington's (since they are one of the few that has released their schedule)!

Weber State's had a nice balance of home games and away games, but Eastern Washington is not quite so fortunate. Such are the breaks for mid-major teams sometimes.

Their home slate in the non-conference features South Dakota, UC Davis, Linfield, and Pacific Lutheran. Suffice to say it would be extremely disappointing if they lost any of those games. On the road, however, they were not afraid to challenge themselves.

They will start the year by traveling to Gonzaga on November 11, a team that is the favorite in the West Coast Conference. It will be a tough matchup for EWU inside, but should be an entertaining game against an in-state rival. A week later they will travel to face Oregon, who will be brimming with confidence in year 2 of Dana Altman's tenure, after winning the CIT in his first season.

Their next major conference opponent is Dec 3 against Washington St, another emotional game featuring an in-state rival. While the Cougars lost Klay Thompson, they return guys like DeAngelo Casto, Reggie Moore, and the underrated Brock Motum. On December 14th they will travel to UCLA. The Bruins lost a couple guys early to the NBA Draft, but they will be a fringe top 25 team with Josh Smith and Reeves Nelson still in the mix. Finally, they will travel to take on St. Mary's, fresh off a 25 win season and likely to be playing with a chip on their shoulders.

That is 5 tough road games for Eastern Washington in the non-conference... if they could win 2 of them, they would have to feel very good about themselves. Jim Hayford is not afraid to test his team early on in the season.
Posted by Jon at 12:00 PM