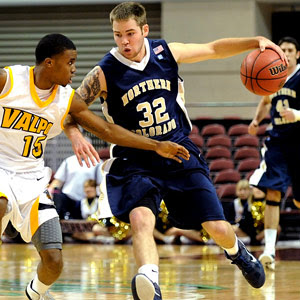 Of all the player leaving the Big Sky, none will be more difficult to replace than Devon Beitzel. He was the conference POY in 2010-11, was one of the most efficient offensive players in the country, and helped lead UNC to their first NCAA Tournament berth. Not a bad senior year.

So how will they replace him? As is often the case when you lose a great player, it will not fall on a single person.

The player who it seems will get even more of the ballhandling duties will be Elliott Lloyd. As a sophomore, he averaged 7.5 PPG and 3.3 APG, posting the best assist rate on the team. However, he also had a very high turnover rate, and that will need to change. He is a bit of a 3-point specialist, as he shot more 3s than 2s, which was ok since he converted 41.9% of those 3s.

Then there are a couple of guys that played modest mintues as freshman last year, but will be counted on much more heavily this season. The first is Paul Garnica, who as 6'1'' as a solid all-around game. He had a decent rebounding rate for a guard, but a high assist rate. However, like Lloyd, he had a high turnover rate, and he will need to learn to take better care of the basketball. He has the potential to be a defensive playmaker for the Bears, as his 4.3 Stl% just barely trailed Will Cherry of Montana (4.7%). However, Garnica needs to become more efficient scoring the ball. Despite being only a 27% 3PT shooter, he took 56 3s (as opposed to 74 2PT attempts). To become a potential All Big Sky player like he has the potential to be, he has to either improve his outside shot or quit taking it so much.

Another freshman that will see bigger minutes in his sophomore year is Tate Unruh. If you could extrapolate his efficiency over more minutes, you would have a star (if only basketball worked that way). In limited time he was 8/16 from 2PT range, and 13/31 (12%) from downtown. Nothing wrong with that. Without Beitzel, they will need him to score points.

UNC does have some recruits that could see immediate time. Aaron Hawk-Harris is a bigger guard that could have an immediate role. Tim Huskission is 6'5'' and could immediately be the best athlete on the team. These guys have definite upside, and some will definitely need to play a bit right away, so it will be interesting to see who emerges.

How does everyone else think UNC will go about replacing Beitzel?
Posted by Jon at 8:00 AM