How Will Idaho St Replace Broderick Gilchrist and Deividas Busma?

We are talking about replacing stars this week, and the next team to look at is Idaho State. They had one of the worst teams in the Big Sky last season, finishing 9-20 on the year with a 4-12 conference record. They accomplished this by being one of the worst defensive teams in the country (Opponents had an ORtg of 111.7 against, 311th worst in the nation), and being not that much better offensively (44.6 EFG%, 318th in the country).

To add insult to ineffectiveness, they will be losing arguably their two players in Broderick Gilchrist and Deividas Busma, both Big Sky Honorable Mention selections a season ago. So how will they replace them and fill their event space?

Gilchrist was their leader last year, playing a team high 35. minutes per game, though he had a bit of a disappointing senior year after a stellar junior campaign. He was not a very efficient player, shooting 45.6% on 2s and 32.9% from 3s. He dominated the ball but had more turnovers than assists. But he will be important to replace simply because he played so much.

The onus on replacing him, it seems, will fall on two different guys. One is Kenny McGowen. McGowen had the second highest shot rate on the team, so he will be able to take over that role for Gilchrest! He also needs to improve efficiency in all facets offensively... he had very similar ARate and TORate to Gilchrest, and his shooting percentages were slightly lower. He shot more 3s than 2s, so it will be interesting to see if he can get into the paint more next year. 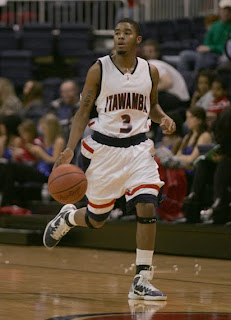 The other guy is newcomer Melvin Morgan, a JUCO Transfer from Mississippi. Morgan averaed 15.9 PPG while dishing out 3.4 APG, and looks to have a great chance to start from Day 1. Says coach Joe O'Brien:

Look for Morgan to take over primary ball-handling responsibilities, and the fate of the Bengals may rest in his hands.

Busma was a 7-footer, so it will be a little more difficult to find someone to replicate that. He led the team in rebounding per game, and was one of the better shot blockers in the conference (with 56 on the season).

Abner Moreira will be counted on to pick up a lot of the rebounding slack, and he seems to be up to the ask. At 6'9'', he had the best rebounding rate on the team last season. He was also solid at getting to the FT line, and was an 80% shooter once he got there. He will be heavily relied on down low in his senior season.

After that, there is uncertainty. Brandon Glanz redshirted last year and should be in the mix, but at 6'6'' is a bit of a tweener. Jakub Kusmeriak sat out last year after transferring from Central Florida, and at 7'4'' figures to get some good run. In his last year at UCF, he averaged 1.8 PPG and 1.3 RPG in 6 MPG. He will likely be in line for some solid minutes. Incoming players Dejan Kotsur and Garrett Swanson could have a role, but I am not sure how that will play out.

The good news for Idaho State is that things can't get much worse than last season. The bad news is that I'm not sure they're going to get a whole lot better.

Would love to hear any Idaho State fans chime in on how they see these guys getting replaced.
Posted by Jon at 8:00 AM