How Will Montana Replace Brian Qvale? 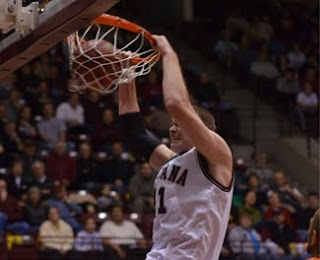 I suspect few people outside of the Big Sky know just how good Brian Qvale was last season (and throughout his career for Montana). He was the Big Sky Defensive POY last year, but he also finished 6th in the conference in scoring (at 14.9 PPG). At 8.8 RPG, he led the Big Sky in rebounding. With 3.0 blocks per game, he had 19 more blocks than anyone else in the conference. He shot 62.6% from the field, which was second in the Big Sky among player that shot more than 25 times on the season.

Tinkle has a large void to fill, as starter Brian Qvale has graduated. The 6-11 center led the team in scoring (14.9 ppg) and rebounding (8.8 rpg), and was a first team All-Big Sky Conference pick and the league's "Defensive Player of the Year." He also set conference records for career blocks (247) and single-season (95 last year) rejections.

He was extremely efficient offensively, great on the boards, and the best defensive big man in the conference (and one of the best in the country). Safe to say Coach Wayne Tinkle wishes he had another season of eligibility.

All of this begs the question... how is Montana going to replace Brian Qvale?

The first person to look at is Derek Selvig, the 7-footer who has been a constant presence in the lineup. Even though he is a 7-footer, his game is very different from Qvale's. While Qvale was a traditional post player, Selvig is more skilled, and likes to move around the court more. He shot 100 3-pointers last year (making 39), but was not all that efficient inside the arc, shooting just 41.5% from 2s. He is one of the best passing big men in the country, and had an ARate of 19.8, second on the team behind Will Cherry. While his length will still cause defensive problems, it would be huge if he can improve rebounding the ball to make up for some of Qvale's loss.

Another guy that will be counted on is Mathias Ward, although he too is not a traditional big man. He is 6'7'', and a skilled offensive player, but is not great rebounding or on the defensive side of the ball. He has a nice midrange game, and shot over 50% last year (and an impressive 81% from the FT line). However, he struggled guarding physical posts, and posted mediocre rebound rates (7.1 OR%, 10.8 DR%). He can be effective in certain roles, but might have to be hidden a bit defensively. He brings a lot of versatility to the lineup though.

Then there are a couple of guys that played limited minutes as freshman, but will be called on to contribue in Billy Reader and Eric Hutchison. Both are 6'9'' and more traditional centers. Billy Reader seems to have the most upside, and he could be the best post scorer on the Montana roster. Hutchison is more raw, but could be a solid post defender and rebounder.

Without Qvale, things will certainly be different for Montana, as they will not have that dominant defensive big man and efficient low post scorer. It will be up to a combination of guys to replace him... If the bigs can get it done for Montana, another top 3 finish in the Big Sky seems very likely.
Posted by Jon at 8:00 AM