The season is about seven months away... which is the perfect time to make some early, rash predictions on how things are going to play out next season! 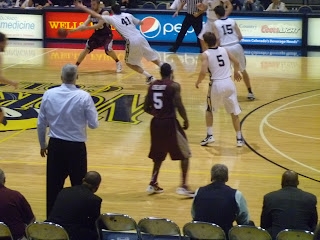 1. Montana
They lose Derek Selvig and Art Steward, but they could be the unanimous pick in the Big Sky next season. Will Cherry and Kareem Jamar will be one of the best backcourts in the country next year, and they bring it on both ends.They will have some front court depth concerns again (and they have to hope Billy Reader is eligible), but they will be set everywhere else. Kevin Henderson and/or Keron DeShields should be able to step into Art Steward's starting spot.

2. Weber State
They lose the best player in the league, but the cupboard will hardly be bare for Randy Rahe. With Gelaun Wheelwright and Scott Bamforth, they still have one of the best backcourts in the conference. Kyle Tresnak is one of the best frontcourt scorers, and Byron Fulton may be ready to take on a bigger role. Davion Berry is a guy that not many know about since he was a redshirt last year, but word is that he may have been the second most talented guy on the team last season. They also bring in a nice recruiting class.

3. Northern Colorado
They return almost everyone from last year's team, and they will be better for all the experience. With Tevin Svihovec, Tate Unruh, and Paul Garnica, you can't give anyone in their backcourt a good luck. They have a redshirt guard in James Davis that is supposed to be pretty good, and bring some things to the backcourt that they lacked last season. Upfront, Emmanuel Addo has the talent to be the best big man in the Big Sky, but he needs to show more consistency. Connor Osborne was solid as a sophomore, and needs to take the next step. They have some depth concerns, but they are working on it, especially with recruit Cody McDavis.

4. Eastern Washington
They are losing a lot of talent and leadership, but it might not be a terrible thing to get some fresh faces in there after being the most undisciplined team in the Big Sky. They will return Collin Chiverton, who should be healthier and could lead the conference in scoring. Other than that, they have a couple of transfers that look like they could make an impact, and they will be bringing in a big, partially unknown recruiting class. How those guys respond and how ready they are to play will decide if this ranking is too high.

5. Sacramento State
This should be the best Hornets team in a long time, and they will be led by Dylan Garrity. He led the conference in assists as a freshman last year, and should improve as he gets more consistent with his outside shot. Inside, they have a nice duo with John Dickson and Konner Veteto, and Joe Eberhard flanks them on the wings. Depth is a bit of a concern, but they will return quite a bit of experience from a team that improved greatly from the first half of the Big Sky season compared to the second half.

6. Montana State
There is a lot of uncertainty around the Bobcats, but we can say that on paper they have the potential to be a good team. Among the uncertainties - Shawn Reid is transferring, Xavier Blount will hopefully (but I'm not sure anyone knows for sure) be returning this year after being injured in a bar fight, and Jamie Stewart will hopefully be returning after running into some academic issues. They are tough to project right now. What we do know is that they have some good recruits coming in, some talent upfront back, and if Blount/Stewart both return, they will arguably be one of the most talented teams in the Big Sky.

7. Portland State
Renado Parker is back, and he will be relied on heavily upfront. He will be one of the best post scorers in the conference, and they need him after the graduation of Chehales Tapscott. If he becomes an all-conference type player, they will be in ok shape. They will also have some guys that were ok in roles as juniors (such as Lateef McMullan and Michael Harthun) to take the next step and become reliable every game. They hope Gary Winston will be able to step in and fill the shoes of Charles Odum. Winston looked like one of the better, young guards in the conference last year.

8. North Dakota
I thought they would be able to take the next step last year since a lot of their guys were coming off successful freshman seasons, but they didn't really seem to improve a lot. They have some good talent that will be juniors in Troy Huff, Aaron Anderson, Brandon Brekke, and Jamal Webb, but they have to show improvement or they will finish in the bottom half of the Big Sky. Also of concern is the lack of big men in the program... behind Brekke, they don't have much. This has not been a recruiting strength for head coach Brian Jones.

9. Southern Utah
With guys like Jackson Stevenett and Damon Heuir returning, they have some solid players for Nick Robinson. However, they do lose some talent, and it is tough to overlook the fact that Robinson will be 32 years old and it will be his first college head coaching gig. I do think Robinson will be a very good coach, but there are usually some growing pains. I don't have a great handle on the Thunderbirds yet.

10. Northern Arizona
This is still all up in the air, since they don't have a head coach, and we aren't sure if everyone will be back next year. Assuming everyone came back, they have some solid talent on the roster, though they still have a problem with a lack of big men. Also, the fact that they have been nursing career decisions on picking a new head coach (despite the last coach resigning in December) has really hampered recruiting.. I'm not sure we've quite seen the bottom yet for NAU, which is a scary thought after how rough last year was.

11. Idaho State
They were the feel-good story of the Big Sky last year, but they are taking a big talent hit with the graduations of Chase Grabau, Kenny McGowen, and Abner Moreira. I think they are headed with a good direction with the hire of Bill Evans (who was big in making Montana a defensive stalwart in the conference), but it could take them a couple years to get the talent level back to where it needs to be, especially losing key guys from a team that arguably overachieved last season.