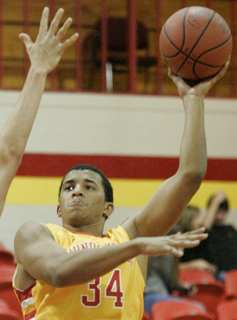 Picture off Sac State website
I wrote last week about Sacramento State signing Jordan Salley, Mikh McKinney, and Cody Demps. Yesterday, they added another in big man Ryan Okwudibonye (if he gets big minutes, I am going to have to get that spelling down...)

Okwundibonye is a 6'8'' big man from California who has spent the past two seasons at New Mexico Junior College. Last year, he averaged 4.6 PPG and 4.6 RPG, shooting 43.8% from the field. He started 21 of their 32 games. He was second on the team in rebounding, and third in blocked shots.

“Ryan is a strong center/power forward that is physical and a very good post defender,” Katz said. “His combination of strength and quick feet defensively will allow him to guard multiple positions on the court. He’s a player we’ve followed over the last three years, and feel like his best offensive days are ahead of him.”

While I'm not so sure he will have much impact at all offensively after scoring just over four points a game and shooting a low percentage in junior college, there is always a spot on a roster for a big man that can guard the post and rebound. Sacramento State's other recruits have been guards or wings, so this definitely fills a need in frontcourt depth behind John Dickson and Konner Veteto.