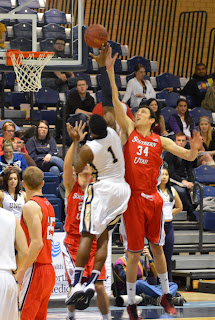 I was at the Northern Colorado/Southern Utah game tonight, where UNC punched their ticket to the Big Sky tournament with a 66-58 win. As always I could talk at length about the game, but just wanted to separate out two quick things to talk about (because there were four other important games!)

- On Monday night against Montana, SUU PG Damon Heuir had 29 points, and kept the TBirds alive in the second half. In this game, he was 0/1 and scoreless at half, and finished with four points on 2/8 shooting. How did the Bears do it? It wasn't just that Heuir had an off night - he simply had no openings.

Tevin Svihovec was really solid, it was the best defensive game I have seen him play. UNC switched every screen where Heuir had the ball, knowing that he has a quick first step and the ability to angle past defenders and use his strength to get to the lane. So they switched and made sure that Heuir did not have anywhere to go right off the screen (SUU like to screen for him at the top of the key). Of course, it's tough to say that this strategy would have worked as well as it did if Derrick Barden wasn't frequently the guy switching. As good as he is in other areas (18 points, 10 rebounds), his defense gets overlooked. He can guard basically anyone in the Big Sky, from ones to most fives. UNC was keyed by their defense in this game, which is not a statement that has been said a lot the past two years.

- It was my first chance to watch Jackson Stevenett in person, and boy, he is impressive and fun to watch. He finished with 25 points and 7 rebounds, even though he was battling some foul trouble throughout the game. He has such a high release that it seems like he can get off a shot off almost anytime that he wants. Nobody in the Big Sky uses the backboard as well as he does, and it's not even close. His midrange jumper is really good, and he has a knack for getting an open look.  It is too bad that the Big Sky only got to enjoy him for one season.