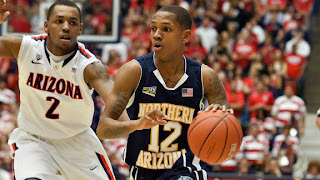 With Big Sky teams having anywhere from four to seven games under their belts, let's take a look at some of the early season surprises, trends, and noteworthy/interesting items.

- DeWayne Russell and Venky Jois - In my preseason preview under the top newcomers section, these two guys are the top freshman listed (Jois is #4 newcomer, Russell is #9), so they are not coming out of nowhere. But it certainly qualifies as a surprise at how well these guys are playing. I hope to write more about them in the coming weeks, but a quick peek shows that Jois is averaging 13.6 PPG and a conference leading 8.9 rebounds per game while shooting 55% from the field. Russell averages 16.3 points, 3.4 rebounds, and 3.6 assists, shooting 47% from the floor and 44% from downtown. Jois has an ORtg of 107.9, while Russell checks in at 110.9. They could be all-conference players already.

- Struggles of the Big Sky - It's not a surprise that the conference is struggling a bit, as some of the top teams are dealing with issues, such as Montana (Will Cherry's injury), Weber State (finding their way after Damian Lillard), and Eastern Washington (Collin Chiverton has gone through the deaths of two people close to him). But still, only one team (Sacramento State) is over .500, while two other teams are .500. Five teams have just one victory. Some of it is early season guarantee games, but there have been some missed chances.

- Idaho State may be the country's most boring team - This is not an indictment on them, because I believe this gives them their best chance to win, but there is no question that the Bengals can be a tough team to watch. No opponent has scored more than 60 points against them, and they have scored less than 50 on four occasions. They are 318th in the country in pace, and their offensive efficiency is 325th. I think this grind it out style is going to win them one or two games this year that will surprise some people, but fans may have to cover their eyes.

- The lack of defense - Eastern Washington leads the conference in raw points per game allowed, giving up 84.0 per game. Adjusted stats show that they have not been the worst defensive team, but that high number is partly due to pace (they are the 19th fastest team in the country so far). Seven teams are 270th or worst in adjusted defensive efficiency so far, with four schools 300th or worse.

It is not a great sign that the Hornets are 5-2, best record in the conference, but are last in defensive efficiency. Simply put, the conference is going to continue to have a low profile as long as teams struggle so much defensively.

- Top four rebounds are newcomers - I have already talked about Jois, the freshman who is leading the conference. After him is Joel Bolomboy, a freshman from Weber State who has pulled down eight per game. He has been the best rebounder in the conference so far, with an OR% of 14.3 (fourth in Big Sky), and a DR% of 23.5 (tied for Jois as best in Big Sky), but I am not sure he will get enough minutes to lead the conference. Derrick Barden (my pick to lead the conference) is third, while Martin Seiferth is fourth. There was a good infusion of rebounding talent this year.

- Dylan Garrity should shoot more - Last season, Garrity averaged 6.9 assists per game but was average in shooting the ball. This year, the assists are down to 5.4 per game, but he has been otherworldly shooting the basketball. His TS% is 78.2% (third in the country), putting his ORtg at 141.6. He has made 31/32 free throws, 73.1% of his twos, and 46% of threes. Obviously this won't keep up, but he is becoming a dynamic offensive force, equally adept at scoring or finding an open teammate.

Has anything else caught your eye early in the year?