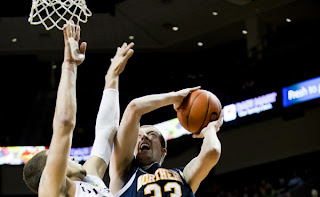 Last season, Northern Arizona won just a single Big Sky game, finishing with a 1-15 mark in the conference. This year, they have matched that mark after just one game.

Northern Arizona started fast and held on for an 87-80 victory over Montana State in head coach Jack Murphy's first career Big Sky game. Surprisingly, it wasn't the guard play that was the difference, but the play of big man Max Jacobsen. He came into the game averaging 5.9 points and 4.1 rebounds per game on the year.

Against the Bobcats, he was good for 22 and 9, icnluding 9/12 shooting from the court. He also had a couple blocks for good measure. He was the difference with key post points when MSU was making their second half surge (it was an 18 point game at half, but the Bobcats cut it to as low as five in the second frame). Jacobsen was a star, and if he continues that, NAU is a legit threat in the Big Sky.

DeWayne Russell was solid but not spectacular. He had 12 points at the break before finishing wiht 16 points, 8 rebounds, and 5 assists. All five NAU starters finished in double figures. Senior PG Stallon Saldivar picked up his 400th career assist in the game as well.

For Montana State, they drop to 2-6 on the year, and they didn't look great in this game. They struggled in a major way defensively, and only looked good offensively in spurts. Antonio Biglow had 15 points, but they need him to be a guy that gets easy baskets for others as well. He had three assists compared to two turnovers. Xavier Blunt and Jamie Stewart are other guys with the talent to take over stretches and get others good looks, but they didn't do that in this game.

It's a big year for Brad Huse, but I have a feeling he still doesn't know what he has in his team. On the other side, we know what Jack Murphy has - a program on the rise.