Breakout Sophomores in the Big Sky

After Luke Winn's article last week looking at potential breakout sophomores in the nation, I think it would be fun to look at similar players in the Big Sky. So here are (in my opinion) the best candidates to breakout next season in their sophomore campaign. 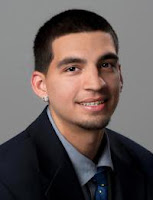 - Paul Garnica (Northern Colorado) - Garnica is loaded with potential, as he does a lot of things very well. He posted one of the best steal rates in the BSC (4.3%), rebounded well from the guard position, and made some plays passing the ball (21.4% ARate). However, he needs to improve in 2 areas - taking care of the ball, and taking better shots. He turned it over 28.3% of the time as a freshman, which is far too high. In comparison, BSC POY Devon Beitzel had a 15.8% TORate. That is a lot of wasted possessions. Garnica also had an EFG% of only 45.0%, thanks to going 15/56 from downtown. He would be wise to cut down on his attempts (unless he has been working on it all summer). If he can improve in those two areas, he has the all-around game to be an All-Conference player.

- Emmanual Addo (Northern Colorado) - Another player from NoCo, which is not really a surprise - with the loss of 4 contributing seniors, the young guys will play a key role for BJ Hill. Addo will log a lot of minutes in the post, and he looks to be up to the challenge. He played 37% of the team's minutes last year, but was an excellent performer for his time on the court. He was a great offensive rebounder, with his 12.3% second on the team to Mike Proctor. He was also an efficient scorer, with a 53.5% from inside the 2-point arc while making a respectable 68% of his FTs (and he was solid at getting to the line). If he can make a natural progression from year 1 to year 2, Addo will be a pleasant surprise, and he will be a solid starter for the Bears.

- Kareem Jamar (Montana) - Jamar is hampered a bit by the solid depth the Grizzlies have, but he had a very productive freshman season and has the talent to be even better as a sophomore. He was solid but not great offensively, shooting 48.5% from inside the arc and 38% beyond it. Both solid, but there could especially be improvement from 2 point range. Jamar is a solid rebounder for his size, and takes good care of the basketball for a guard. He is also a solid defender. Jamar is one of those guys that might not put a lot of points on the box score (8.1 PPG as a freshman), but he is an excellent contributor for the Griz and will be one of the most important players as they contend for the Big Sky championship. Cherry and Jamar is one of the best backcourts in the Big Sky.

- Byron Fulton (Weber State) - Weber State is excellent in the backcourt, but there will be some question marks about the frontcourt heading into this season. One of the answers will likely be Fulton, who had a solid freshman year as a role player. At 6'7'' Fulton will be one of the big guys, but he does not have a traditional low post game. He is dangerous from outside the arc, shooting 24/50 from long range last year. He was the Conference Freshman of the Year, and his role could expand a bit more this year, especially if he can play well defensively. He posted a solid 16.0 DR%.

- Jackson Carbajal (Sacramento State) - Carbajal played solid minutes last year, and will be relied upon even more after the graduation of Sultan Toles-Bey. He has room to improve, as he was not that efficient last year. He took a lot more 3s than 2s, even though he was a 31% shooter from downtown and 57% shooter inside the arc. He should reverse that trend, and look to get inside more this season. He also posted a backward Assist/TO ratio, turning the ball over almost 3 times as much as he got an assist. Still, Carbajal deserves a mention here because he will get plenty of opportunity to improve this year, and he should see a lot of playing time once again.

What do you think? Should I have included anyone else? Who will be the best sophomore in the Big Sky this season?
Posted by Jon at 12:02 PM