What Happened to Alpha N'Diaye? 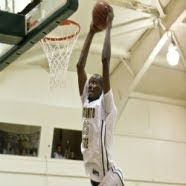 But, Sacramento State released its roster, and N'Diaye is not on it.

I haven't been able to find any information on it, so that is why I am writing - Does anyone know why he is not on the roster? I know he spent 2 years at a junior college and redshirted a year, so my hunch is that he simply graduated and moved onto other opportunities. But that is simply a hunch, and I am curious to find out if that is true.

I have sent an email to Coach Katz and sent Alpha a Facebook message (some great sleuthing there, to be sure), so hopefully we will find something out.

UPDATE: I have been able to confirm that N'Diaye has been declared ineligible this season and will not play for Sacramento State. Big loss for them, as he would have been a nice piece of the frontcourt during his senior season. Hopefully this will be a wakeup call for him to get focused.
Posted by Jon at 9:56 PM