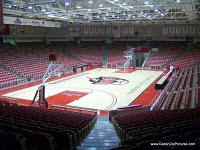 I have not written a lot about future BSC member Southern Utah, so to rectify that, let's take a quick peak at their 2011-12 schedule.

They will start off at the BTE Classic, with their first game coming against San Diego State. You might remember them as the team that made it to the Sweet 16 last season. While the Aztecs will lose a lot of talent, they should still be one of the four best teams in the MWC, and so it should be a barometer for how far the Thunderbirds need to go. Their other two games in the classic will come against UC Davis and Bryant University.

They will have a couple road games of note, as they travel to take on Weber State (obviously future BSC opponent) and Utah State. Both are big games against Utah rivals, and the Thunderbirds would be ecstatic if they could steal either game. Don't foresee that happening, however, as both teams are clearly a step above Southern Utah (harsh, but fair).

The rest of the schedule is predictable. Home games are against Montana State Billings, Southern Virginia, Troy, and UC Davis. Their other road game is against Troy. That is correct, they will play Troy and UC Davis twice each this year.

The conference schedule will obviously come against the Summit League, in their final season of the being a member of the Conference. Last season they finished 7-11 in conference. While they only lost one contributor from that team, I think finished about the same in conference is a reasonable expectations for the Thunderbirds. Time will tell, as they would love to leave the Summit League with a bang (and not a whimper).
Posted by Jon at 12:02 PM