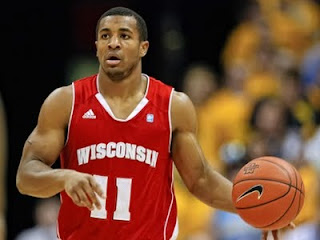 With Montana set to take on Wisconsin on Thursday, let's take a look at the Badgers.

They are a very unique team, as they play the second slowest pace in the nation behind Western Illinois. They do this in part because they are one of the very best teams in the country at avoiding turnovers, but they also don't force a bunch either. They don't like to push the ball, and are content to let the shot clock wind down before taking a shot. This forces you to play their pace, and not the other way around.

Offensively, they are reliant on the three-point shot, where they get over 40% of their points (they shoot 36.1%). Almost everyone on the team is capable of hitting from the outside.

Defensively, though, is where the Badgers shine. They are one of the best defensive teams in the country, allowing 85.8 points per 100 possessions (fourth in the country - by comparison, Montana gives up 93.6 points per 100 possessions, 42nd in the country). Teams shoot just 28.9% from beyond the arc against the team, but more important they are excellent at not allowing teams to shoot many threes. In a college game that is sometimes dominated by the three-point shot, this is an important skill.

In terms of allowing twos, they are elite as well, as teams shoot just 41.3% inside the arc against them. This adds up to a 41.8 EFG% against, second best in the nation. They don't turn you over often, but you don't get good looks against Wisconsin and you don't get many opportunities for second chance points.

Like Montana, they are a team that relies heavily on their starters... their bench plays just 21% of minutes (compared to 22.4% for Montana), which is in the bottom 16 in the country. They have started the same five guys all season, so let's take a quick look at those guys:

- Jordan Taylor (SR) - Their star. He was seen as a potential All-American before the year, and even though he had a little bit of a down year compared to those standards, he was still excellent. He excels at taking care of the ball and making good decisions, as he has had a great turnover rate the past few years. One strange thing is that his shooting percentages have gone down this year. He shoots just 43% from twos, and 35.5% from downtown. His assist rates are also down a bit as well this year. That said, he is their senior leader and a guy that can hurt you.

- Josh Gasser (SO) - He is not a prolific offensive player, but he does a little bit of everything for the Badgers. He is efficient offensively, and makes 45% of his threes. He is a pretty good rebounder for a guard as well. Even when he is not scoring, he finds other ways to help the team.

- Ryan Evans (JR) - He is the rare Badger that doesn't shoot the ball well from the outside (7/32 this year), but he still does a lot of things for Wisconsin. He is the best rebounder on the team, and pulls down 6.8 boards per game. Even though he isn't a great outside shooter, he is the second leading scorer on the team after Jordan Taylor with over ten per game.

- Mike Bruesewitz (JR) - Like Evans, he hit a lot of outside shots (though he has taken 78 threes this year), but he can do a little bit of everything. He is the best offensive rebounder on the team, and second chance points are huge in close, low scoring games (like this one projects to be). He shoots just 38% from the field, so Montana is ok if he decides to take some shots from outside. If they want to play small, they will bring in Ben Brust, who plays over 30 minutes per game.

- Jared Berggren (JR) - He is the prototypical Bo Ryan big man, because he can stretch the floor well. He is 6'10'' but shoots 37% from downtown. He is also comfortable going down low, and this makes him probably their second best offensive player. Not super athletic but smart. He is a solid defender as well and is their best at protecting the rim, where he has a 6.0 block rate.

Anything I missed about the Badgers?