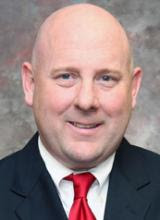 This was posted while I was in the middle of my honeymoon, which is why I missed it. Oops! Anyway, nice article by Diamond Leung on new Eastern Washington coach Jim Hayford.

Hayford played the percentages and won. In fact, he’s never gone through a single losing season in 12 seasons as a head coach. Before Eastern Washington looked no farther than nearby Whitworth University in Spokane to find its new coach, Hayford’s tactics had enabled the Presbyterian school to methodically emerge as a Division III powerhouse and make an Elite Eight appearance last season.

It's a very nice article overall, including interesting stuff about how his daughter has twice beaten leukemia. It is a very good, well-written article. Hopefully we will see more and more on Hayford throughout the years, because that will mean good things are happening for Eastern Washington.

I think Hayford is going to be a success for EWU, and I am excited to see his teams play. The season begins in a couple short weeks.