A Few Thoughts on Danny Powell 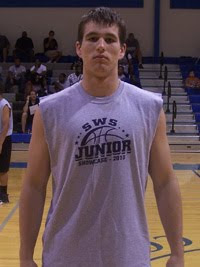 I said a few days ago that F Danny Powell committed to Eastern Washington, but let's take a little bit of a closer look at him.

He is a 6'6'' forward out of Arizona, and averaged a stellar 22 PPG and 10 RPG last season as a junior. His high school coach thinks Powell could have gone to bigger schools, but believe Eastern Washington was the right choice because of the fervor of the coaches recruitment.

"(Eastern Washington coaches) were amazed he's not going to a bigger school," Williams said. "I told him I wouldn't go to Butler or any of those schools. Go where you're really wanted."

Powellwanted to play early, and could definitely have a chance to do that in Cheney, as the Eagles on long on guard and short on big men (and yes, I phrased it that way just to confuse you. The best scouting report on him comes from Rivals:

Powell had a major impact as a freshman and sophomore at the varsity level, and has a bright future ahead of him. He has tremendous size for his young age, resembling that of former Mesa Mountain View HS standout Harper Kamp. What makes Powell so impressive though is that rather than just be a bigger post player that roams around the painted area, Powell is highly skilled and likes to create scoring opportunities for himself and others off the dribble - a very impressive skill for a player his size, and at such a young age. While it is still unclear as to just how much Powell will continue to grow, he is very well developed now. Powell's mother stands 5-foot-8 in heigth, while his father is 6-foot-5, so the bloodlines are definitely there. Powell is a gym rat, a highly desired trait sought after by most college programs today. Already a very good ballhandler for his size, he is also a very good shooter with nice range on his shot. He is also a very good finisher to the basket when attacking off the dribble, where he often draws fouls and gets himself to the charity stripe. Powell also has an intangible with him that is most important of all - toughness. He is a gritty performer that takes challenges and loves to compete.

It sounds like Powell is a guy that Jim Hayford went after hard... From the reports, it seems as though Powell has a chance to be a very nice contributor at the Big Sky level.
Posted by Jon at 11:02 AM