We have reached the part of the season where you can almost throw out head to head results. With 9 teams separated by two games, and six tied with identical 3-5 Big Sky records, it's not feasible to say that someone should be ahead of another team simply because they beat someone else.

For example, North Dakota went on the road and beat Idaho State. Idaho State creamed Northern Colorado in Pocatello. So obviously North Dakota would beat Northern Colorado in Grand Forks, right? Wrong, as you probably guessed, since the Bears beat UND there earlier this year. That is just one of many such examples. So what that means is that spots three through eleven basically can be put in any order. Here is mine.

1. Weber State (13-3, 8-0) - They just won four games in ten days, but the road will get even tougher. Their next four are on the road, with trips to Montana, Montana State, North Dakota, and Northern Colorado. If they escape that unscathed, it would be fair to start to talk about them running the table in the Big Sky. Based on close road games against Southern Utah and Portland State, I don't think they are quite ready for that.

2. Montana (12-4, 8-0) - They are again undefeated in conference play (I believe their streak is at 21 straight games), but so far, this team is not as good as last year's version. The biggest reason is defense. Last season, their AdjD was 95.0, which was 58th in the conference and led the conference by a mile. This year, they are at 103.8, which is 243th in the country (and fourth in the conference). The Grizzlies are really good again, but they have a ways to reach last year's ceiling.

3. Montana State (7-9, 4-4) - All of a sudden, the Bobcats are playing almost as well as anyone, as they probably should have beat Montana, and followed that up with a nice win over Southern Utah, bouncing back in a strong manner. They have already traveled to North Dakota, Northern Colorado, and Montana, so if they can get through the first half of conference play at 5-5, they will be in good shape. However, as MSU fans will tell you, past performance (and in the first half of the Big Sky season) does not guarantee future returns (in the second half of Big Sky play). 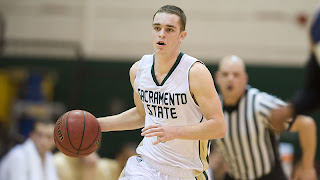 4. Sacramento State (8-8, 3-5) - Among their losses, a one point defeat to Montana, a loss on a buzzer beater to Idaho State, and giving Weber State all they could handle in Ogden. The team benefits when the ball is in Dylan Garrity's as much as possible. He shots 57% on twos, 40% on threes, gets to the line, and has a great assist rate. Everything in the Hornets offense needs to run through him.

5. Northern Colorado (5-11, 3-5) - It's not that they beat Portland State and Eastern Washington that was so impressive, but the way they did it. The PSU game was over within the first ten minutes, and the game against the Eagles was the most impressive I have seen them play since winning the Big Sky title. The key to the team might be sophomore forward Tim Huskisson. At his best, he is a plus defender who can knock down threes and score in transition. But he can get lost defensively at times, and lost focus offensively and turn the ball over.

6. North Dakota (7-10, 4-4) - As they showed in their last three games, they can win at home. If they can beat Sac State or Northern Arizona on the road this week, they will enter the second half of conference play with a lot of confidence. A key for them has been getting to the charity stripe. They are third in the conference in FT rate, and knocking down nearly 75% of their free throws when they get to the line. Troy Huff has posted an ORtg over 100 in each of the last four games.

7. Portland State (5-10, 3-5) - Their offense has been a bit better than I expected, thanks in part due to the big improvement by Lateef McMullan (more on that in a near future post). They haven't really had problems scoring the ball. Defensively though, things are still ugly. By the numbers they are the worst defensive team in the conference, but this year there is no Chehales Tapscott and Charles Odum to boost their offense every night.

8. Northern Arizona (6-12, 3-5) - Point guard Stallon Saldivar now ranks ninth on the all-time Big Sky assists list, with 440 career assists. The next name to pass is Billy Allen (Nevada) who finished his career with 468 career assists. Here's hoping he continues to move up those record books.

9. Southern Utah (5-12, 3-5) - No team allows its opponents to shoot more free throws, but they help combat that defensive liability by not allowing teams to shoot many threes. Their biggest problems continue to come on the offensive end, where their turnover rate is still very bad. One reason they have been able to keep all of their games close is that they are the second best defensive rebounding team in the conference. They don't allow teams to get a lot of second chances, and that is huge.

10. Idaho State (4-13, 3-5) - After a 1-11 start, they won 3 of their lat 4 but I think they still face long odds to make the conference tournament. They don't shoot the ball well from the outside, don't get many second chances, and because of their slow pace don't get many easy baskets in transition. It's tough to score enough points when these things are all true. They have only cracked the 60 point mark against DI opponents twice, and one of the times required an 88 footer. They will win a few more, but it will be tough for them to get to the 9 win range.

11. Eastern Washington (4-14, 2-6) - They are committed to letting the young guys play, especially after the departure of Justin Crogsile. If you look ahead a couple years to the system that Jim Hayford wants to play, guys like Venky Jois and Thomas Reuter are going to be key centerpieces on the team, and you can see how well they fit. There are a lot of growing pains right now, but the team will be better in the long run for the experience the freshmen are getting.

Your thoughts? What would you change?