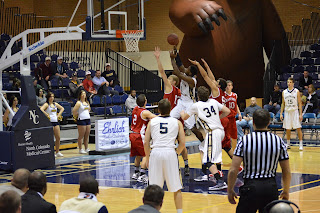 Other than Montana and Weber State, Northern Colorado has the highest ceiling of any team in the Big Sky. I say that with confidence right now, especially after watching the Bears beat Eastern Washington 72-56 on Saturday night. Simply put, it was the best performance from UNC I have seen them give since I started covering the Big Sky, and one a lot of people have thought they had in them.

The Bears were led by their defense and rebounding. They outrebounded the Eagles 47-29 in the game, including grabbing a whopping 18 offensive rebounds (more on that later). They held EWU to just 8/23 from downtown and 38% shooting for the game. It was a stellar effort from the starters and the bench, as BJ Hill tightened up the rotation a bit, playing just eight guys.

The star for the Bears, and the reason that teams might not want to play them come conference tournament time is Derrick Barden. He scored 15 points and grabbed 15 rebounds (the second time in three games that he had 15 rebounds), including eight on the offensive glass. Simply put, and this is not exaggeration, he can do things athletically that nobody else in the Big Sky can do. On a fast break he went up for a dunk attempt over Venky Jois, and even though it missed, it was an impressive athletic display. I am hoping to write more about him later in the week, but he is the difference between UNC and some other Big Sky teams. The combination of Barden and Tim Huskisson will be tough to matchup against.

Tate Unruh continues to play real well for Northern Colorado as well - to me he is playing at an all-conference level offensively. He is so lethal on the catch and shoot, coming off screens. With just a little bit of room he buries you. He was 5/9 from downtown and finished with 21 points. His off the dribble game is improving as well.

While UNC improved to 3-5 in Big Sky play, Eastern Washington dropped to 2-6. They are a young team, and it shows. They struggle with consistency, and don't always have great shot selection. Collin Chiverton is a guy that can shoot you in or out of a game, and unfortunately he struggled tonight, finishing just 5/16 in 19 minutes.

One guy you can't help but be impressed with is freshman Venky Jois. He finished with 15 points, 8 rebounds, and 7 blocks. He still leads the conference in rebounding (but Barden is on his tail), and has a nice offensive game as well. He was solid in the post, and has a really nice handle for a big man. He is the cornerstone for the future of this team, and that is a good thing. Another freshman, Daniel  Hill, handled the ball well, but was limited by an apparent ankle injury early on. It could be a long rest of the season, but I do think the Eagles have a bright future.