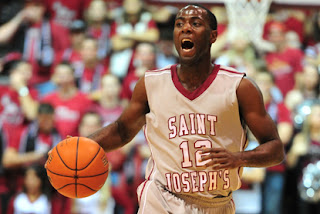 Crosgile, the leading scorer on the Eastern Washington University basketball team, cited a “need to be closer to home” for his surprise decision to leave the squad earlier this week.

“It’s been a great experience at Eastern Washington, and I have nothing against the coaches or players here,” Crosgile said in a telephone interview Friday night.

Crosgile said he plans to return to his native New Jersey to be near his mother and his 3-year-old son.

Crogsile was averaging over 14 points and five assists per game, so the loss is potentially big for the Eagles. However, Jim Hayford's club is not unprepared.

Freshman guard Daniel Hill is eligible, and I know he is a guy that the coaching staff likes a lot.Though he has yet to put up much numbers, there are signs that he will have a big role. He has played five games this year, with increasing minutes. Last night, he took the potential game-winning shot at the end of regulation, and the ball was in his hands as he drove to the hoop to try and tie the game (but was blocked by Flavien Davis). He will be one to watch.

In the end, Crogsile played 12 games for the Eagles after sitting out last season due to transfer rules. We wish him the best in his future, and EWU will look forward to the future with Daniel Hill and others at the PG spot.