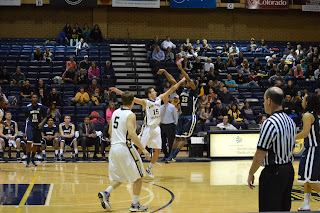 Not long ago, Montana State was 3-7 overall, 0-2 in the Big Sky Conference, and losing two of their most talented players (Jamie Stewart was dismissed, Antonio Biglow was suspended). Things looked bleak. But then a funny thing happened. The Bobcats started playing like a team, becoming much better defensively, and attacking the rim more offensively. They became a little bit more than the sum of their parts.

After two home wins last week, MSU faced a test of coming into Greeley and playing a Northern Colorado team that was pretty desperate for a win. For most of the game, it looked like UNC was going to get it, as they led by as many as nine in the second half. But the Bobcats hung around, and made their move over the last four minutes.

They got some help to... as Northern Colorado seemed to get tight, committing turnovers down the stretch and missing some easy shots. Tevin Svihovec struggled with a couple bad turnovers, and Tim Huskisson threw a lazy pass in the last 30 seconds. Each time, MSU took advantage. When they had the ball, they were the aggressor, with guys like Xavier Blount and Mike Dison (who hit the go-ahead free throws with about 30 seconds left) taking the ball to the rim and getting fouled or getting easy baskets. 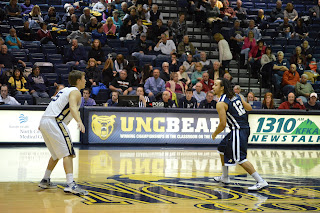 All of a sudden, the Bobcats are 3-2 in Big Sky play and playing good, team basketball. They have a nice rotation going, with Mike Dison/Marcus Colbert at the point, Christian Moon/Xavier Blount/Calen Coleman on the wing, and Paul Egwuonwu/Flavien Davis up front. They are confident and look like a team that will be playing in the Big Sky tournament.

Some other notes from the game:
- Derrick Barden was as good as advertised, finishing with 14 points and 11 rebounds. He was fantastic on the glass, skying for offensive rebounds and using his big hands to come down with them. He looked like an all-conference player in this game.
- Tate Unruh is my favorite shooter in the Big Sky conference to watch (with all due respect to Scott Bamforth). He has a great release and smooth stroke. He led the Bears with 23 points, including 5/11 from downtown. Unfortunately, the rest of the team was 1/10 from deep.
- To call UNC unsettled at the PG spot right now would be kind. Tevin Svihovec was supposed to make the leap, but he has been making some bad decisions, especially down the stretch. Paul Garnica was probably the top backup option coming into the year... but he had his pocket picked by Christian Moon early in the game and didn't play the rest of the way. James Davis was their best PG in this game. He is still trying to find his way offensively, but he is their most sound perimeter defender.
- I thought the refs got it right on a flagrant-2 foul call (along with ejection on Blake Brumwell in the second half. With Unruh going for an uncontested layup, Brumwell gave him a full two-handed shove while Unruh was in midair. It was a dangerous play, and the refs were right to boot Brumwell.
- When Xavier Blount does not settle for threes, but goes hard to the rim, he is one of the more dangerous players in the conference. He is tough to defend because he is so strong and uses his body well.
- I am not sure it is what Brad Huse intended when the season began, but I really like the PG duo of Marcus Colbert and Mike Dison for the Bobcats. They are very unselfish and give maximum effort on both ends.

Anyone else watch the game?

*Photos taken by my lovely wife!