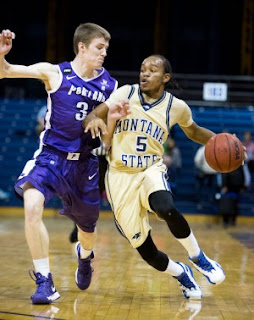 And then there was one. As in, one Big Sky team undefeated in league play.

In the surprise of the night, Montana State took down previously undefeated Weber State, strengthening their position as the third best team in the Big Sky (at least, for now). It was no fluke either, as Montana State played good defense (save for a barrage of threes at the end of the game by Weber State, which made the final score of 79-74 closer than the game was at the end), took great care of the ball (7 turnovers), and made all of their free throws down the stretch (including their last 12).

It was a big win for Brad Huse, as they moved to 5-4 in Big Sky play, notching easily their biggest win of the season. There was no shortage of heroes, but the biggest one might be Antonio Biglow. The much talked about junior guard scored 18 points (in 24 minutes) off the bench, also getting three assists and three steals. He was huge down the stretch.

“He's really been coming along since he's been back with us,” Huse said of Biglow, who missed five mid-season games with a suspension. “Tonight he did a good job negotiating our offense and making good reads, making solid plays for us. It's really encouraging moving forward, the depth we have in that backcourt and the things they all bring.”

Xavier Blount chipped in an efficient 18 points and 7 rebounds, while Paul Egwuonwu added a double-double for the Bobcats. Davion Berry led the Wildcats with 24 points, but a lot of those came on late threes. The Wildcats missed some key free throws late. With memories of last year's loss to Idaho State surely on their minds, they will need to quickly refocus, as they head to Missoula on Saturday night.

Idaho State kept things interesting for awhile, but eventually Montana pulled away from the Bengals, winning 70-51 to move to 9-0 in the Big Sky. It has been a very long time since they have lost a Big Sky game.

Mathias Ward scored 21 points to lead Montana, while Spencer Coleman scored 20 points off the bench. If Coleman can find his groove, the Grizzlies are going to be extremely tough to beat.

A couple injury notes in this game. Will Cherry left the game in the first half after being poked in the eye, but he did return in the second half. He finished with six points. Meanwhile, reserve guard Jordan Gregory wasn't as lucky. He left the game with a leg injury, but said he didn't know the extent of the damage yet (it may be known by the time you read this). Here's hoping it's not serious.

The most thrilling game of the night was in Flagstaff, where Northern Arizona beat Northern Colorado 67-65 on a buzzer beater from senior guard Mike Dunn. It was a well played game with both teams making shots.

NAU got a great performance by Gabe Rogers, who finished with 28 points on 11/19 shooting, none bigger than a late three that put the Jacks up 63-62 late. He also hit a couple of big free throws. With the score 65-62, Tevin Svihovec banked in a long three with 4.8 seconds left. On the next possession, NAU took it the length of the court, getting a nice floater from Mike Dunn to win the game. It was a great play design and great execution.

Svihovec led UNC with 16 points, while Derrick Barden notched yet another double-double (13 points and 10 rebounds), but it was not enough for the Bears to pick up a key road win. NAU is now 4-5 in Big Sky play, while UNC is 3-6.

Dylan Garrity hurt his back in pregame warmups and missed the game, but it didn't matter, as Sacramento State downed North Dakota by a final of 67-58. UND opened the game on a 24-12 spurt, and looked like they might roll to a comfortable road win. However, the Hornets then went on a 26-6 run of their own, with UND's first second half points coming at the 12:25 mark.

Four players scored in double figures for the Hornets, notable John Dickson (11 points and 12 rebounds) and Cody Demps (a career high 10 points). The Hornets moved to 4-5 and their schedule sets up nicely for them to make a little run.

North Dakota drops to 4-5, but through no fault of Troy Huff. He had 24 points and 9 rebounds, and continues to look like one of the best players in the Big Sky.

Last, Southern Utah took down Portland State with relative ease, winning 76-63 in a game that was never really in doubt. Jackson Stevenett led the way with 21 points, while Damon Heuir added 19 points and six assists. The Thunderbirds won this game down low, with a 20-10 advantage in second chance points and a 36-18 advantage on points in the paint. SUU moves to 4-5.

* Picture from the Bozeman Daily Chronicle