Hope that everyone had a great New Year's! I figured there was no better way to ring in the new year than with some power rankings... These will be in flux for a while because spots three through eleven still seem to be really up in the air. It seems to me that we know less than we thought we did at the start of the season! Anyway. 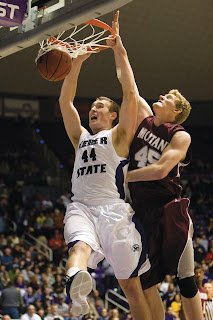 1. Weber State (7-3, 2-0) - While their offense is a bit worse after losing Damian Lillard, their defense has taken a big step forward this season, and is top 100 in the country in efficiency (after being in the mid-200s last year). One interesting thing is that big man Kyle Tresnak has morphed into a solid shot blocker so far in his junior year. His block rate went from 2.9% to 7.8%, and he is blocking an extra shot a game. There is a sample size issue, but with him and Joel Bolomboy, it's a little tougher for opponents at the rim.

2. Montana (6-4, 2-0) - It's tough to get a read on the Grizzlies, because Will Cherry has played in just three games, and only sparingly in one of them. Rebounding continues to be an issue. They are the second worst team in the country in getting offensive rebounds, which means they aren't getting any extra possessions. They shoot the ball well, but with an average turnover rate and no second chances, their offensive efficiency has not been great this year. It will be interesting to see what Wayne Tinkle does to negate this.

3. Sacramento State (6-4, 1-1) - Last year, Dylan Garrity averaged almost seven dimes a game but was not a big threat to score the ball. This year, he is doing both. The assist numbers are down a little (5.5 per game) but he is scoring more, and doing it extremely efficiently. His ORtg is a blistering 128.6 so far, and he is playing at an all-conference level. If Joe Eberhard can start scoring and shooting like he did last year, the Hornets could be as good as almost anyone in the conference offensively.

4. Southern Utah (4-7, 2-0) - I still see them ending up in the bottom half rather than the top half of the standings, but you have to give them credit for the 2-0 start. They are a very bad offensive team, but Nick Robinson's bunch has managed to grind out a couple wins. Against UNC, they got some breaks, but capitalized on them at the end. One thing that needs to be shored up is turnovers... they are in the bottom five in the nation in turnover rate.

5. Northern Colorado (3-7, 1-1) - After last year, you got the feeling that their offense would be really good if they could just cut down on turnovers. Well, they barely cut them down, but their three-point shooting hasn't been nearly as good. I thought PG Tevin Svihovec would take a big leap this year, but that hasn't happened yet. His TO rate of 27.6 is worst on the team, and that needs to change if the Bears are going to contend.

6. Northern Arizona (4-8, 1-1) - DeWayne Russell has cooled down after a blistering start, which is tough for NAU because they rely on him a lot. Gabe Rogers is a willing shooter, but they don't have a lot of other guys that can create shots for themselves. They key to the team may be Max Jacobsen, who has been a pleasant surprise down low, shooting 61% from the field. They don't have many other inside scoring threats.

7. Portland State (3-6, 1-1) - Defense has again been an issue for the Vikings, as teams have shot over 55% against them inside the arc this year. Like many teams, they look like they will be tough at home (took Weber State to OT), but will struggle away from the Stott Center (and it's scoreboard). A road trip through Montana this week should tell us a lot more about the team,

8. Eastern Washington (3-9, 1-1) - The Eagles will welcome Collin Chiverton back this week, and it will be good to see him in action again. The real surprise has been freshman Venky Jois. We knew he would be good, but not this good, this fast. He is shooting 51% on the year, and looks to already be the best rebounder in the Big Sky, as he pulls down 9.4 per game. Their success will boil down to defense, as they have been poor in that area this year.

9. Montana State (3-7, 0-2) - Their defense so far this year has been dependent on forcing turnovers. They force them at a good rate, but bad things happen when the other team gets shots up, such as shooting 58% on twos against the Bobcats. They still look like a team to me that has some nice individual talent (with guys like Antonio Biglow, Xavier Blount, Calen Coleman) but they don't necessarily know how to play together yet.

10. North Dakota (3-8, 0-2) - It is good that they have Troy Huff back, because the offense really struggled without him.  He hasn't been great yet this year when he has played, but he draws some attention away from a guy like Aaron Anderson, who can be a really good offensive weapon as long as he isn't the main option. They have to shoot the ball better, it's that simple. Their effective FG% is just 42.2%.

11. Idaho State (1-10, 0-2) - Bill Evans came into a tough situation, because there just really isn't much offensive firepower on this roster. In 11 games, they have scored 50 points or more just four times. They combine the nation's sixth least efficient offense with the fourth slowest tempo, meaning their games aren't always a lot of fun to watch. They need some frontcourt help also, after being outrebounded 43-16 by Washington State in their last game.

*Image from Erin Hooley of the Standard-Examiner