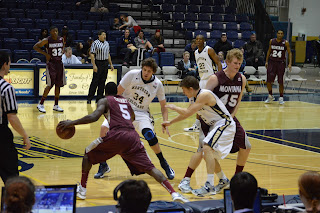 On Saturday in Greeley, neither team was really able to stop the other. Montana shot 56% for the game, while Northern Colorado shot 50%. However, Montana was the team making the plays down the stretch in an 85-77 Grizzlies victory. It was a fun one to watch in person, as teams were making threes, putback dunks from UNC, and Will Cherry and Kareem Jamar doing their thing.

Kareem Jamar was his normal smooth self. He doesn't have athletic ability that jumps out at you, but he does everything well. He almost couldn't miss on this day, scoring 26 points on 9/10 shooting (including 4/5 from downtown). He also had six assists on the day. He was especially key late in the first half... with UNC up by as many as 15 points in the first half, Jamar was the spark Montana needed. In the last few minutes of the first half, he hit three threes, and drove in for an and-1.

Will Cherry also played a huge part in this game, scoring 21 points, while dishing out six assists and grabbing five rebounds. He is their emotional leader, and helped get them going in the second half, on a day when the crowd was a bit sleepy (attendance was 355, thanks to having the game opposite the Broncos game). It would have been an easy game to sleepwalk through, on the second leg of a road trip, but Cherry made sure the energy was there in the second half. Cherry and Jamar are fun to watch play together, because they know each other's games so well. 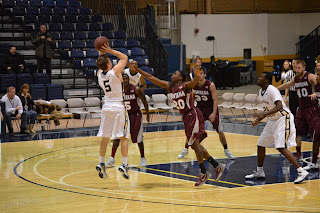 Not all is well for Montana, because they still struggle on the glass (UNC had 18 offensive rebounds), and they don't get hardly any post touches, but Cherry and Jamar can make up for a lot of other deficiencies.

For Northern Colorado, it was not a bad effort at all. Offensively, they played as well as they have all year against a quality opponent, turning it over just 7 times. BJ Hill said afterwards that it was about as well as they can play offensively. Tevin Svihovec was playing like he did last year, with 19 points. It was his best effort of the year. Derrick Barden was an absolute beast, with 21 points and 15 rebounds (8 of them offensive). I hope to write a little bit more on him in the near future, because he is a ton of fun to watch.

Defensively, though, the Bears still had a ton of issues. They have a tendency to lose guys (on a key possession late, with Montana up 78-73, Mathias Ward broke free near the end of the shot clock for an easy and-a, because the UNC defender lost track of him). They also struggle to help when the offense penetrates and gets past the first defender. The big men don't have great close outs, which is a problem against teams that can put four or five shooters on the floor, like the Grizzlies can. Add it all up, and it's a lot for the Bears on a day when the offense played well enough to win.

However, the game did showcase the talent that made me pick Northern Colorado to finish third before the year began. Barden and Tim Huskisson are the most athletic pair of forwards in the conference, and Tate Unruh and Svihovec provide plenty of spacing with their shooting ability. The pieces are in place, and they are getting better. The bad news is, at 1-5, they need to start winning some games quickly.

On the other side, Montana just continues to win. They move to 6-0 in Big Sky play. The scary thing for the rest of the conference is they already have a gaudy record, and Wayne Tinkle's teams always seem to get better as the season goes on.