Two weeks remain in the Big Sky slate. As of right now, there is realistically probably 7 teams battling for 3 spots in the conference tournament. There is also intrigue at the top. Here is a quick rundown: 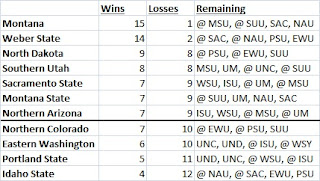 - Here is a quick reminder of the Big Sky tiebreaker rules.

- It is a tough two game stretch for Montana, especially if they are playing without Will Cherry and Mathias Ward. They travel to Bozeman to take on a reeling Montana State team this Saturday, and then have to travel to Cedar City to take on Southern Utah two days later. That is a huge game, and it will not be easy for the Grizzlies.

- As long as Weber State gets past Sacramento State, it is hard to see another loss on their schedule. That would keep the pressure on Montana

- It is easy to see the importance of North Dakota beating Northern Colorado last week. UND is now alone in third place and basically a lock for the tournament. Meanwhile, UNC would have been in fifth, but now they sit in eighth, just below the cut line. They likely need to beat either EWU or PSU on the road (which is not going to be easy), and then take down Southern Utah at home. They have not done themselves any favors.

- Southern Utah gets Montana State at home, and then they will welcome Montana. For that one, the TBirds will be on extra rest, while Montana travels on short rest. A win in either of those games should get them in.

- Eastern Washington gets North Dakota and Northern Colorado at home this week. Based on their spot in the standings and the fact that go to Ogden in the final weekend, they have to win both of those games to have a chance. They are definitely capable.

- Montana State has more home games than anyone else down the stretch, which (in theory) puts them in a great position down the stretch. But with the way they have been playing of late (5 straight losses, and losers of 6 of 7), nothing can be assured.

- Sacramento State could basically put themselves in if they can upset Weber State this week, but as long as they take care of things at home against Idaho State, they should still be in good shape. Basically, they would put themselves in a spot where they would need to beat either NAU or MSU on the road in the final week. That can be done.

- Northern Arizona also has to play both Weber State and Montana. They are in the same spot as Sac State... they have to take care of ISU at home, and then beat either Sac State or Montana State on the road. If they do that, they should be in pretty good shape.

It will be a great final two weeks in the Big Sky... with the possible exception of Portland State/Idaho State on the final day of the regular season, literally every game matters in a big way.

*Thanks to Dave for the Excel standings idea!