Derrick Barden Is A Star 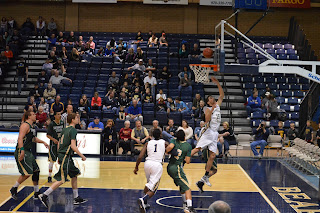 Since conference play began, Derrick Barden has played like an all-conference player. On Saturday night, he played like the best player in the Big Sky. In Northern Colorado's 78-64 win over Sacramento State, the Hornets simply had no answer for Barden on either end.

Let's start with the numbers. Barden had 15 points and 10 rebounds... in the first half. And that was even after he went down for a few minutes with a leg injury. He finished the night with 21 points, 14 rebounds (6 offensive), and shot 10/11 from the field.

Offensively, I thought he was very assertive from the get go. He used his quickness and strength to establish great position down low, and scored when he got the ball down there. He was a monster on the offensive glass, and turned most of his offensive rebounds into easy baskets. He scored on the drive. All of his baskets were within five feet (at least, that I can remember)... and he is 6'3''! There's nobody else like him in the Big Sky.

Defensively, he executed the game plan very well. After getting burned a bit by UNC's guards in the first meeting between these teams, the Bears made an effort to jump all back screens and show, and nobody was better at this than Barden. After jumping the screen, he forced the ballhandler to dribble back a few feet, and then was quick enough to get back to his man. That was a big reason why the Hornets offense was out of sorts for most of the night, and Dylan Garrity and Mikh McKinney couldn't really get anything going all night, finishing with nine points apiece.

I have said all year long that UNC has the third highest ceiling in the Big Sky, and Barden is the reason. He is a lot of fun to watch. 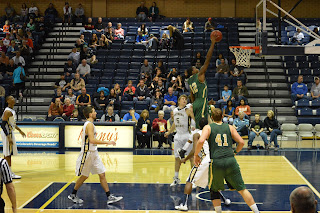 A few other notes:
- Tate Unruh had another nice day, finishing with 20 points. He moves off the ball as well as anyone else in the Big Sky.
- Tim Huskisson was also a big factor for the Bears. He had 15 points and was good on both ends. He is still a little bit inconsistent as a sophomore, but he is on the cusp of being a really good player. It will be fun to watch his development.
- Joe Eberhard was a non-factor for the Hornets in this game. He had two points and two rebounds in 20 minutes, and it seemed like his impact was even less than that. He was such a good player for them last year, but seems to be lacking in some confidence now.

The Bears and Hornets are now part of a four way tie for fifth in the Big Sky at 7-9. Northern Colorado feels like it's hitting its peak right now, while Sacramento State's once promising season seems to be falling off the rails. It will be an interesting final two weeks.