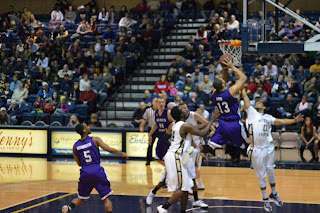 Northern Colorado scored the first basket of the game, but Weber State was in control the rest of the way. At the half, Weber State led 45-25, shooting 62.1% from the floor (while holding UNC to 32.3%), prompting Bears coach BJ Hill to bring out his second unit to start the second half. However, there was no tactic that was going to work for UNC in this game - Weber State was just dominant on both ends of the floor.

On offense, the Wildcats were a model of efficiency in this game. They shot 60.8% from the floor for the game, including 8/17 from downtown and 15/18 from the stripe. They are unselfish with the ball, and can hurt you in so many ways. Five guys were in double figures tonight. Among the ways they hurt you:

- Scott Bamforth is so good. He is one of the top two shooters in the Big Sky (if not the best), but he is also really good handling the ball and always in control. If he gets a split second (and they are good at getting him that time), look out. 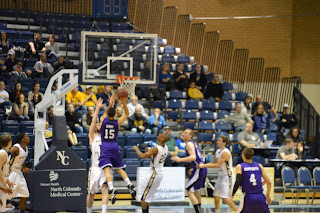 - Davion Berry is so smooth. He has a beautiful jumper, and is a good passer as well. He doesn't force things, but seems to be able to get a good look whenever he wants to. Very versatile offensive player.
- Frank Otis, a guy that really impressed tonight. He was 6/6 from the field, and is now shooting 68.1% from the floor over the season (72% in Big Sky games). He is another guy that doesn't force things, and he even had a sweet spin move tonight. He's a senior who has seen a lot of things in his college career, and it shows.
- The two-headed PG monster of Jordan Richardson and Gelaun Wheelwright is really good, and combined for 17 in this game. Richardson  does everything well, while Wheelwright is a little more up and down, but more prone to make a spectacular play. In this one, it was a sick stepback three that nobody could have guarded.
- Finally, there is Kyle Tresnak in the post. When matched up against UNC's second line, he simply had his way down low. 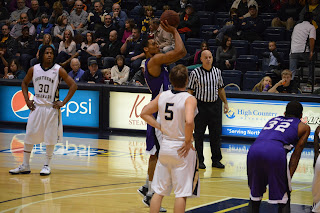 - Also, Joel Bolomboy is not a dangerous weapon offensively per se, but he is very good at getting second chances for the team, and had a monster putback jam in this game. There are not a lot of guys more fun to watch than him.

Defensively, Weber State is really tough. First, they are the best team in the country at not allowing their opponents to shoot threes. This is a very real and very important skill. When opponents do get off three-point attempts, they aren't that good, which is why opponents shoot less than 28% against them. If you try to go down low, guys like Tresnak and Joel Bolomboy are there to block you. They have made huge strides on the defensive end of the floor.

Here is the difference between Weber State and most other teams in the Big Sky (and this was evident tonight). When the game speeds up and intensity rises, most other teams in the conference get out of control, and look a bit out of sorts, making bad decisions. These Wildcats stay within themselves and more often than not, make the right play. 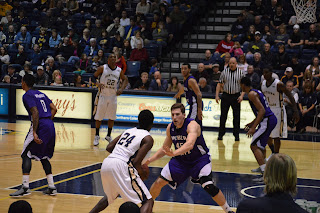 A couple positives for UNC... Emmanuel Addo looked solid. He was aggressive, finishing with 11 points. This is big for UNC, because Addo and Paul Garnica are the only consistent scorers on the second unit. Greg Tucker continues to come along as well. He made some freshman mistakes early, but overall was a nice contributor for the Bears.

Here is my takeaway from the game... I understand that Montana is a lot better now even than they were three weeks ago when I saw them in Greeley. But so far this year, Weber State is the best Big Sky team I have seen. The Grizzlies have the two best players in the conference... but Weber State is the deepest team. We have at least one more game between these two teams coming up, and I am hoping for two more.

* Photos courtesy of my lovely wife!