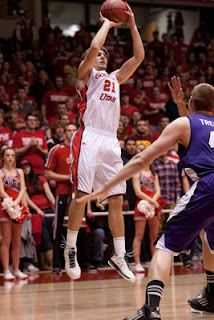 Before the year started, I thought Collin Chiverton would be the leading scorer in the Big Sky, for a variety of reasons. Things obviously haven't quite worked out that, but there is a good race going on for the scoring title. There are three realistic contenders for the scoring title during conference games, but let's take a look at the top six right now, and go through a quick dissection of where they are at their best.


1. Jackson Stevenett (Southern Utah) - 19.9 PPG
Stevenett has been his normal self, as this is right in line with what he has done throughout his career. This is his highest scoring output, but that is only because he is a bigger part of the offense than ever - he has remained his efficient self. He shoots over 50% on his twos, and has a three-point shot that at least has to be respected (20/61 on the year). He is also good at getting to the line, and has shot a remarkable 120/135 (88.9%) from the line this year. For as much as he does for them, his efficiency and ability to pick his spots is fun to watch. He should get consideration to the conference POY.

2. Gabe Rogers (Northern Arizona) - 19.5 PPG
Rogers fires up eight threes per game - 215 total on the year - which, shockingly, isn't even in the top ten in attempts. He shoots 34.4%, which is not great, but not bad at all. Rogers is in a spot where sometimes he is forced to take a lot of shots, because (other than himself and DeWayne Russell), NAU guys struggles to create their own shots at times. He is 13th in the country in % of his team's shots he takes while he's out there, at 33.8%. He doesn't have a great game going to the hoop and scoring inside (41.7% inside the arc, which remarkably is a huge improvement on last year's 31.1%), and doesn't draw a lot of trips to the line.

3. Troy Huff (North Dakota) - 19.3 PPG
Huff is fifth in the country in % shots taken, at 35.8%. He might be the most athletic player in the conference, and is the most likely (along with Joel Bolomboy of Weber State) to throw down a highlight reel dunk, which he has done on multiple occasions this season. He has been amazingly consistent on his two-point percentage in his career - 48.6% (2011), 48.6% (2012), and 48.4% (2013). He is not a great outside shooter, though much better than last season. He doesn't get to the stripe a lot, and only shoots 68% when he gets there. If he can work on his three-point shot and/or free throw shooting this offseason, he can be a major force next year.

4. Damon Heuir (Southern Utah) - 17.3 PPG
Unlike his teammate Stevenett, Heuir is a little bit more of a gunner than an efficient offensive machine. He shoots the same percentage as Stevenett from three, but he has taken more than twice as many, hoisting up six per game. Inside the arc he is only at 41.2%, which is not great. He is solid at getting to the FT line, where he shoots a solid 78%. I think all of his shooting is at least partially due to the fact that SUU is not teeming with a lot of guys that can create their own shot, which can force Heuir to try to make something out of nothing. There is no denying that even though his percentages aren't great, he is a key cog in their offense this year.

5. Davion Berry (Weber State) - 15.2 PPG
Berry has matched the hype, becoming the top scoring option for a deep Weber State team. He doesn't force thing, and will pass the ball if someone else has a better look or if he is just having an off day (22.5 ARate). He has shot 53.5% from inside the arc, and 43.5% outside it, both of which are excellent marks. He has been good but not great at getting to the line, but is only shooting 71% from there. Room for improvement. He has been everything Randy Rahe could have asked for, and more.

6. Aaron Anderson (North Dakota) - 15.2 PPG
Anderson has been asked to do more than ever this year, and while his shooting percentage from three has dropped (48.1% down to 41.1%), he has made it up it with a better assist rate and lower turnover rate. But alas, this is about his scoring ability. Even though the three point shooting it down a little, 41.1% is still really solid. He has really improved in his ability to get to the line, which is especially important since he shoots 85% from the stripe. Before the year, I thought Anderson's ceiling might be a good role player. I was wrong. He has shown he can be a really good #2 scoring option. He might be the most improved player in the Big Sky.