With two weeks left, everything matters. There are five games on Thursday night, and every one of them has big implications in the race for the conference tournament. Let's make some predictions.

Weber State 72, @ Sacramento State 64
Neither team will lack for motivation. Weber State's once poor chances of getting the top seed got a lot better within the last week, and they know it. A Montana loss suddenly looks a lot more possible in the final four games. The Hornets are capable of pulling an upset at home, but I just think WSU will be locked in for this game. If they are, they are too talented to be beat here.

@ Portland State 77, North Dakota 72
The Vikings are longshots to make the conference tournament, but their season is not over yet. If they can win two straight at home, they will be very much alive heading into the final weekend. They know that starts against UND. PSU is a much better team at home than on the road, and they will be very motivated. In conference play, UND has been the second worst team in the Big Sky about allowing their opponents offensive rebounds, while the Vikings have been second best at grabbing them. I think the Vikings hold home court.

@ Southern Utah 74, Montana State 63
The Bobcats are going in the wrong direction, having lost five in a row and six of seven. At one point they looked like a sure bet to be a top 4 team in the Big Sky, but now they are barely holding on for a spot in the tournament. I don't see them reversing course on the road against a SUU team that, for the most part, has won the games they are supposed to win. 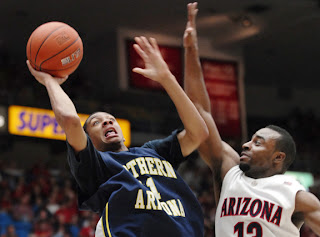 @ Northern Arizona 66, Idaho State 64
You know that ISU is going to come into this game and give it all they have, because that's just what they do. However, I'm not sure they have the firepower to go on the road and steal one away from the Lumberjacks, who know from looking at their remaining schedule that this is a game they have to have.  Gabe Rogers has scored 22+ points in 8 of his last 10 games, and has really picked it up in the second half of conference play. NAU's offense relies on him perhaps more than any other offense in the Big Sky relies on one player, and he has them in contention for a tournament spot.

@ Eastern Washington 74, Northern Colorado 71
These teams are eighth and ninth in the race right now, so it is close to a must win for both teams. UNC has to steal at least one of two road games this week, while EWU needs to win both home games. After the Bears' loss to North Dakota last week, I don't have confidence in them to go into Cheney and get a road win. The point guard play hasn't been there for them. EWU has gotten a boost lately from Tyler Harvey, who has gone from bit player to a potential building block for Jim Hayford.

Thoughts? Anything I have wrong?