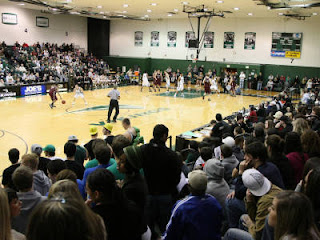 Portland State was one of the last schedules released among the Big Sky teams, so let's take a look at some of their key games, most notably their out of conference slate.

They start the season on the road on November 11 against Denver out of the Sun Belt Conference. While not a marquee game by any stretch of the imagination, Denver has been a respectable team over the past couple of years, so a road win to start the year would be solid.

Two other conference road games of note are against Oregon and Oregon State, and it would be huge if they could beat even one of the in-state rivals. They will play Oregon on December 12 and Oregon State on December 18th. Oregon is coming off of a solid first year under Dana Altman, and Oregon State has recruited some nice players under Craig Robinson, but these are games the Vikings should go into thinking they can win. Their other non-conference road games come against Utah Valley and Cal State Fullerton.

Their home slate, like is customary for Big Sky teams, is not one that is going to excite a lot of fans. They take on Seattle, Linfield, Walla Walla, and Cal State Bakersfield. On the one hand, this is not a lot of competition and they should win these games. On the other hand, it could be nice confidence builders for them before the Big Sky season. Late in the year they will get a home Bracket Busters game.

They will also play in the Jim Thorpe Classic in Laramie. There they will take on the hometown Wyoming Cowboys, and then have neutral court games against Louisiana Tech and Maryland East-Shore. Talent-wise they should come out of that 2-1.

This will be an interesting season for Coach Tyler Geving and Portland State. After a couple of bad seasons following the departure of Ken Bone, expectations are starting to pick back up, as on paper this team has the talent to finish near the top of the Big Sky. How they fare in the non-conference slate will certainly be a harbinger of what is to come in conference play. With their schedule, 9 wins should be a reachable goal, and anything less than 8 would be a little disappointing, in my opinion.

What do you think? What is a reasonable expectation for the Vikings in the non-conference?
Posted by Jon at 10:02 AM