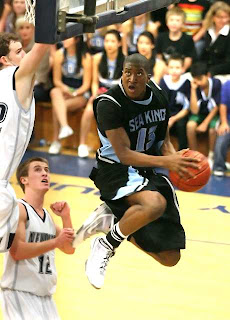 The best seems to be Danny Cheek, a 6'4'' SG out of California. Cheek is a great athlete that has the ability to attack the rim off the dribble. He averaged 15.3 PPG last year. He also has solid defensive potential. He could be the best freshman recruit entering the Big Sky this season.

Another guard that was signed is James Douglas, a 6'0'' PG. He averaged 17.3 PPG and 4.8 APG as a senior last year, and could have a nice future as a scoring guard. He is not super quick, but will find a role in the Big Sky. He probably won't get a ton of time this year, but he will be a nice player for Mike Adras.

The third guard signed is Colin Gruber, a 6'3'' guard that is a proficient scorer. Last season he averaged an impressive 26.6 PPG and 11.6 RPG, and set records at his school for points and steals. He is the son of a coach, and has at least Nor-Cal Basektball thinking he will have a nice career:

Gruber will need to add strength -- as do most freshman entering college basketball -- but Coach Mike Adras run a guard-oriented style and a number of other D-1 coaches are going to rue the day they passed on Gruber.

Northern Arizona also added a JUCO guard in Jywrell Wison (pronounced Ja-rell), who is a 6'3'' combo guard. Last season he averaged 24 PPG, 6.9 RPG, and 4.5 APG. He will be a nice fit in Mike Adras' guard-oriented offense with his versatility.

Two JUCO big men were signed. The first was Max Jacobsen. At 6'8'' he averaged 22 PPG and 8 RPG. He is a threat to score in the low post, but can also come out and hit the 15 footer. He will definitely get a look in a frontcourt that is full of question marks. Also important to note that though Jacobsen is a JUCO guy, he will still have three years of eligibility remaining. He originally committed to Portland State out of high school.

More depth will be provided by Ephraim Ekanem. He averaged about 8/6 last season, and will give Adras some minutes, though his ceiling is a bit lower than Jacoben.

Mike Adras lost a lot of talent after last season, so this was an important recruiting class for him. NAU signed 6 players - 4 guards, 2 forwards - 3 high school players, 3 JUCO. There is a lot of talent there to be sure, so it will be interesting to see who plays this year, and how everyone comes together. Adras has proven himself to be a solid program builder, so it is not hard to envision these guys bringing success to Northern Arizona.
Posted by Jon at 10:02 AM