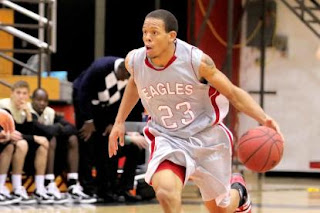 If you look at Kevin Winford's stats last season, he looks just like any other 3-point specialist. He averaged 9.9 PPG, and jacked up 187 treys (compared to 74 2s). He was a solid outside shooter, but most of all he took a lot of 3s.

However, looking a little deeper, you notice something else - he has games of 39 points and 28 points last season. For a guy that is the 4th leading scorer on a team, that is pretty impressive. And it is one of the reasons EWU might be picked to finish as high as 3rd in the Big Sky.

Winford is no doubt a bit of a volume shooter, as none of his percentages jump out at you. In the game he scored 28 points against Idaho, he shot 9/20 from the field and 8/16 from downtown. In the 39 point game against New Hope Christian, he shot 14/27 from the field, 10/23 from downtown. Those aren't bad, but it is not an amazing shooting percentage.

It is unclear if he will be given as much of a green light from Jim Hayford as he had under Kirk Earlywine, and so he needs to add a little variety to his game. He does get many assists (though he doesn't turn it over a lot either), and he is not one to get to the hoop and get to the FT line. He is a 3-point specialist, and 35% is actually pretty average for someone with that role. He is definitely athletic, so it would be nice to see him show a little more restraint in simply jacking up 3s.

With the presence of Jeffrey Forbes, Cliff Colimon, and Collin Chiverton, it remains to be seen if Kevin Winford will start. But either way, he figures to be a key role for the EWU offense. He is very talented... if he can get a little more efficient, he can be one of the most dangerous scorers in the Big Sky.
Posted by Jon at 12:02 PM