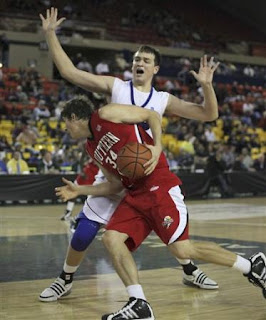 Their best returner is probably Matt Massey, a 6'9'' C that will be a senior. He is an efficient scorer, as he shot 57% from the field and 73% from the line (and got to the FT line at a decent rate). His rebounding rates were poor for a center, but he brings a lot of offensive skill to the table.

A lot of the rebounding was done by Kyle Davis, (who had a great freshman year, but is not listed on their roster... anyone have any ideas where he went).... and Matt Hodgson (who transferred), so that leaves a big void in the rebounding department. Ramell Taylor might be their best returning scorer, but he is a 6'5'' SF. Still, with his 13.5 DR%, he could see a lot of time. Tyson Koehler will also be counted on, as he is a big body and efficient scorer.

In the backcourt, they return some guys that got a lot of time. One is Ray Jones, who will be a senior PG. He had a 24.0 ARate, but he needs to cut down on his turnovers. A guy that could be a potential difference maker for them is guard Jackson Stevenett, who showed a lot of flashes as a sophomore. He got 55% from the field and 74% from the Line. He also posted decent rebound and assist rates. He could be a solid player for the Thunderbirds.

It could be tough sledding for Southern Utah to finish in the upper half of the Summit League in the final year, but they are not void of talent. It will be interesting to see how things go for them before the enter the Big Sky.
Posted by Jon at 10:02 AM