The Other Star in Ogden: Kyle Bullinger 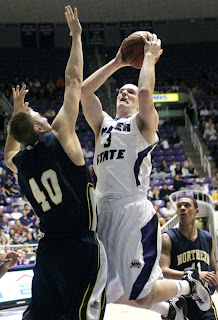 When you think of Weber State, Damian Lillard is the first guy that comes to mind. He already has a Big Sky Conference MVP Award under his belt, and he will be one of (if not the) favorites to win it again this year.

But if you think all of Weber's success is because of him, you would be wrong. Last year, though he got hurt before conference play began, the Wildcats still finished 11-5 in the Conference. One of the big reasons for that was Kyle Bullinger, who was an all Big Sky performer last season.

Putting it all together, and Damian Lillard is certainly the star for Weber State, but he is not the only one. One of the reasons why Weber State is going to be picked to do so well is guys like Kyle Bullinger... they might not get a lot of press, they'll never make it in the NBA, but they are excellent college players at the mid-major level.
Posted by Jon at 12:02 PM