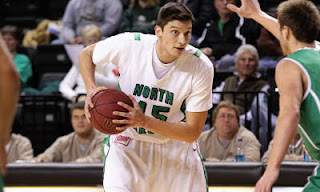 Mitchell is a solid all-around player... he doesn't dominate in any area, but he does a little bit of everything. Probably his best attribute is his versatility on offense. He shot 37% from downtown (on 140 attempts), but he also shot a solid 49.6% from 2s, and got to the line a solid 105 times. His 52.7 EFG% was second on the team behind only Brandon Brekke.

He also had the highest DR Rate on the team, at 19.6%, which was about 200th in the nation. For a team that does not have a lot of height (or, frankly speaking, talent) down low, this is huge for UND. Mitchell can also make some opponents think twice in the lane, as he had a 6.8% Block Rate, 92nd in the nation.

He could stand to improve his FT shooting a bit, as he shot only 63.8%, and any improvement would make a difference since he is adept at getting to the line.

Mitchell is not the most athletic guy you'll find at this level, but he is a very good player, and a big key to what UND wants to do this season. He will be missed after his graduation. In the end, I think Sioux Blog probably said it best:

... it’s important to note that while Huff is the most talented player on the team, Mitchell is probably its best player.