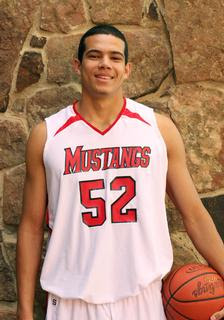 When Deividas Busma exhausted his eligibility, Idaho State lost not only one of their two best players, they lost their best (and the cynic in me would say only) inside scorer from last season. Who will fill the void left by Busma?

One guy that will try to step in is Abner Moreira, who will be entering his senior year. He was the best rebounder on the team last year, and that should certainly continue. He shot a respectable 45% from the field, but that could stand to improve. He is decent at getting to the FT line, which is great, because he shot 80% from there last season.

After Moreira, no returning post got regular minutes last year, which leaves a lot of uncertainty. Jakub Kusmierak will get some PT for a couple of reasons. One, he has some D1 experience, having spent his freshman year at UTEP. Second, he is 7'4''. Kusmieruk will have a chance to earn consistent minutes for the Bengals.

Nobody else on the roster is taller than 6'8'', so they might have to play small for long stretches. Dejan Kostur from Australia will get a chance to be in the rotation, but he averaged just 8 PPG and 4 RPG last season (for a very good JUCO team.

Brandon Glanz is 6'6'', but he did averaged 17 RPG his senior year of high school (not a typo), so he figures to be able to play in the post a bit. He redshirted last season. Then there is Garrett Swanson, also at 6'7'', but he is more of a perimeter player than a post. He will have a role on the team though, as he can drain it from outside. If you are interested, he's got a lot of highlight videos.

Bengals fans, who do you see having the biggest role in the post this year? Am I forgetting anyone?
Posted by Jon at 12:02 PM