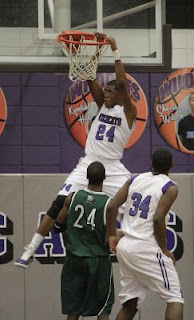 In their second signing of the recruiting period, the Wildcats have snared forward Kyndahl Hill:

So today yo boy commited to weber st

In case you don't know about Hill, he is a 6'7'' forward that can play either the 3 or the 4, but seems likely to spend most of his time at the 3 spot for the Wildcats, according to what I have read.

The consensus seems to be that Hill is a high major athlete that has mid-major skills right now. He was a big time football recruit, but recently decided to focus on basketball only. He averaged 13 PPG and 8 RPG per game.

He has the potential to be an elite defender in the Big Sky with his athleticism and versatility. I think he will eventually be able to guard anywhere from a 1 to a 4, he has that type of speed and strength. He has a developing 3 point shot also, and that will be key to his development.

Teamed with fellow recruit Joel Bolomboy, and all of a sudden Weber State will have two of the more athletic players in the Big Sky. When you combine those with the fact that Josh Fuller will be joining the team following his mission, Weber State shouldn't miss too much of a beat even after Kyle Bullinger and Darin Mahoney leave.

Hill's decision was down to Weber State and Utah State... his choice of Weber further signifies their rise in Utah. I think there is a solid chance they can be the best team in the state next season, and that will only continue to help their recruiting efforts. Randy Rahe has done an excellent job.
Posted by Jon at 10:02 AM