With all nine teams in action on Saturday, it is a rare day for the Big Sky. All teams have a Bracket Buster matchup, so let's get a paragraph preview of all of their opponents, with lots of help from kenpom.com. 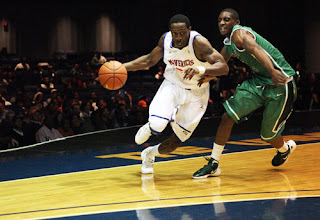 TX-Arlington @ Weber State
They enter the game on a 15 game winning streak, one of the longest streaks in the nation. They play a fast pace (17th fastest in the country), which is usually indicative of offenstively-minded teams, but their strength lies in their defense. They are one of the top ten teams in the country forcing turnovers. They also are adept at getting to the FT line, particularly LaMarcus Reed, who leads the team with 16.8 PPG.

Hawaii @ Montana
They aren't big threats from the outside, but they are a decent offensive team because they make their twos and they can get to the foul line. They also hit the offensively glass hard, with a 36.3 OR% (42nd in the country). Defensively, they are not bad expect in that they simply do not force turnovers. If you give people enough possessions, they will score on you. Big man Vander Joaquim could create problems for the Grizzlies, as he is an efficient scorer, excellent rebounder, and solid defender for the Rainbow Warriors.

Portland State @ Idaho
The Vandals are 1-2 against the Big Sky this year, losing to Eastern Washington and Montana, beating Montana State. They like a slow pace, which will be an interesting contrast against a PSU team that doesn't mind getting up and down the court. Idaho is a good offensive basketball team, as they shoot the ball well (both inside and out) and get to the foul line with regularity. Defensively, they are about average, though again hurt by the fact that they don't force many turnovers. This should be a well-played offensive game.

Eastern Washington @ UC Irvine
They enter the game on a four-game losing streak, and sit at 9-17 on the season. They don't really stand out in any area very well. They play fast, but they are a bit below average offensively and defensively. It will be an interesting match of UC Irvine's youth versus the Eagles experience - Irvine doesn't have one contributor that is a senior. They have been susceptible to giving up the three ball, which is something that EWU specifically looks for offensively.

Idaho State @ Pacific
Both teams had losing records out of conference, but have played better of late. Pacific takes care of the basketball very well. Defensively, they allow opponents to get quite a few threes up - 36% of their opponents points come from behind the arc, seventh most in the country. Ross Rivera is a solid contributor for the Tigers, and he scores efficiently and should have a bright future as a sophomore. He is fresh off a game-winner last Saturday.

Cal Poly @ Northern Colorado
Unlike their opponents in this game, Cal Poly does a good job of taking care of the basketball, and they limit opponents possessions by not turning it over a ton and by crashing the offensive glass, giving them more opportunities.  UNC is good at preventing offensive rebounds, so that will be a key battle to watch. Cal Poly has been better than average at stopping opponents from getting a lot of three-point opportunities, which is key to stopping the Bears. Will Taylor is a guy to watch for the Mustangs, as his game could be a problem for UNC. He is a great rebounder and solid inside scorer. 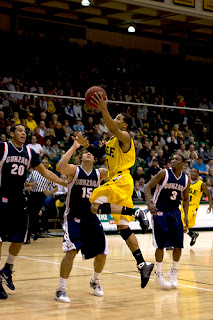 Montana State @ CS Fullerton
These are two teams going in opposite directions - CS Fullerton has won five straight games, while Montana State has lost six straight. The Titans are an excellent offensive team, as they are great three-point shooters (almost 43% on the year), get to the line, and are good at creating second chances. They will be a tough team for the Bobcats to slow down. Their two top scorers are Kwame Vaughn and DJ Seeley, who can score in a lot of ways. MSU is going to need to slow the game down in this one.

San Jose State @ Sacramento State
The Spartans took Weber State to two overtimes, but are now struggling at 1-9 in the WAC.  They look to score from the outside, as they really have just one inside scoring threat in senior Wil Carter. They are not a great outside shooting team, but they take a lot of them.. The Hornets should be able to exploit them a bit down low and get some buckets down there.

UC Davis @ Northern Arizona
I suspect the only people watching this game will be the fans of the two teams. UC Davis just recently ended their 17 game losing streak (and have won two of three), while NAU is in the throes of a 12 game losing streak. UC Davis relies heavily on the three-pointer, as only one team in America gets more points out of it than they do. Defensively, they don't do a lot of things right, going against a Lumberjacks offense that doesn't do a lot of things right. It should be a close game.

Which matchups are you excited to see?