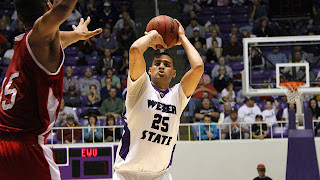 With Weber State traveling to take on a Montana State team that has lost five straight games and would be without its best player, it wasn't expected to be a close, competitive game.

For the first half, it wasn't. Weber State led 42-24 at the break, and they looked like they were going to run away with a blowout victory.

But then MSU showed a lot of pride and toughness, crawling back to make it a battle in the second half, and giving the Wildcats a legitimate scare. At one point, the Bobcats went on a 12-0 run to cut the lead to 48-46, and both Damian Lillard and Scott Bamforth were on the bench with four fouls.

However, it was then that the Wildcats showed that even if Lillard does go to the draft, they will be a solid team next year. They got a big three from Jordan Richardson (to get the lead back to five), and got some big shots by Byron Fulton. Both players are sophomores. Fulton finished with 17 points and got way too many open looks - he is simply too dangerous as a set shooter to leave him free. Gelaun Wheelwright also gave them very nice minutes off the bench, and I really like his game as long as he is not trying to do too much..

Shawn Reid has a career-high 31 points on 12/15 shooting for Montana State, and at times he was the offense. Two of their best outside shooters (Jeff Budinich and Christian Moon) were a combined 2/20 from the field and 0/16 from downtown, so this would have been a blowout were it not for Reid. If there is a silver lining to the Blount incident, it is that Reid will have a chance to be the guy as a sophomore, and he has the talent to grow into that role.

On a night that Damian Lillard did not play particularly well (for him), and the Wildcats were in foul trouble for most of the second half, they have to be encouraged that they were still able to come out of the game with a road win. It wasn't pretty, but 13-1 is still 13-1.

For the Bobcats, they came into the game just needing something positive to happen, and they got that. They shot the ball poorly, particularly from deep, and they still hung in it against perhaps the best team in the conference. That is at least something to build on, which is something they haven't been able to say much lately.