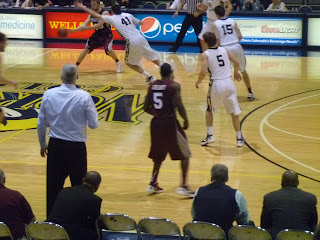 Here were my halftime thoughts from the game.

The last time Montana came to Greeley, they lost the Big Sky conference championship to the Bears, who celebrated their first conference crown.

That seems like so long ago, as Montana erased some of those bad memories en route to a 75-68 victory. The win moves Montana to 11-1 in the Big Sky, while Northern Colorado falls to 4-8.

The biggest key for Montana winning the game was Will Cherry. He was, quite simply, phenomenal. If there was any doubt that he was the best defensive player in the Big Sky, he erased that in this game.

As the head man on a 1-3-1 three quarters court press, Cherry seemed to be everywhere. He finished with 30 points and 8 steals (one off his career record on the night), also chipping in 4 assists and 4 rebounds. He had the look of a man that was not going to let them lose, as he was the leader both offensively and defensively.

The turnovers were really the difference in the game. Northern Colorado shot almost 59% from the floor, and played solid halfcourt defense. However, Montana forced them into 27 turnovers, and scored 36 points off those turnovers (compared to 6 points off turnovers for the Bears).

"We were responsible for half of their points," UNC coach BJ Hill said. "They obviously cranked up the pressure, but it was more a lack of our toughness both mentally and physically than something they did."

At times, UNC struggled to get the ball past half court, and when they did, they had significantly less time to run their offense. Their young guards were just no match in this one for the Grizzlies' pressure defense.

Kareem Jamar and Derek Selvig had 12 points apiece for Montana. Kevin Henderson also contributed solid minutes, and he was their best bench player. He is athletic and will be a force defensively, even if he can only bring it in spurts right now. Next season, a Cherry/Jamar/Henderson trio is going to be a nightmare for opposing offenses.

Northern Colorado at times looked better than they have all year, which has to be a little bit encouraging for BJ Hill. They fell behind early thanks to the barrage of threes from Montana, but came right back and led by as many as 7 in the second half. Four guys were in double figures, including Mike Proctor with 18. In the end, it just wasn't enough.

Cherry now moves into the top 10 in career for Big Sky steals, which is scary since he has another year of eligibility left. With Weber State beating Northern Arizona, we are one step closer to the dream scenario of two 14-1 teams meeting on the final day of the regular season.