Yesterday was an absolute must-win game for Northern Colorado if they wanted to have a chance to make the conference tournament. Sitting at 4-8, 4-9 would not have been a hole they would have been able to come back from, looking at their schedule. However, for 25 minutes, it looked like that was where they were headed, as Montana State led by as many as 16 points early in the second half, before UNC pulled it out for a 77-64 win in OT.

Some thoughts from the game (I was in attendance) in bullet point fashion.

- The key spark for Northern Colorado was that they got into a full-court press (54 press, they called it) early in the second half. BJ Hill said in an interview after the game that it was a staff suggestion, while a member of the staff told me that it was all Hill, and he was just being modest. Whoever's idea it was, it was absolutely huge, and may helped turn this around. Montana State led by 7 at half, and UNC seemed to come out very flat to me in the second half.

So the press did two things - one, it gave the Bears more energy. Coach Hill said, "It gave us some confidence that we could make plays and get some defensive stops which allowed us to get back in there." Two, it took the Bobcats out of their rhythm, and made them take some quick shots at times or hurry more than they would have liked.

- One thing I noticed from MSU, and Bobcats fans have noticed too, after they got a nice lead, they changed from being the aggressor to being a bit more tentative. One reason Hill said they went to the press was that MSU started to take 30 seconds per possession. It seemed like they were content often to do a three-man weave 40 feet from the basket for 20 seconds of the shot clock, eventually leading to a jacked up three (where they finished 4/24). Don't know why they got so tentative. - Tate Unruh finished with 20 points, including a particularly big three in OT that knocked MSU out. He is fun to watch shoot because his stroke is so pure. He is 34/35 from the FT line, which, needless to say, would put him #1 in America if he had enough attempts to qualify. If he gets an opening, the shot is likely to swish through so well it will barely touch net.

- Mike Proctor had a nice day with 8 points, 13 rebounds, and 5 assists, but it was something that won't appear in the box score that may have been his best attribute on the day. You can clearly hear him in the back of the defense, communicating and talking with his teammates, telling them where he was, or if he saw a specific play coming. That is the kind of thing that coaches love.

- Paul Garnica provided a nice spark for the Bears in the second half with a couple nice assists and a couple of nice threes, probably playing the best game he has played in a while. He has a tendency to go for the spectacular play rather than the smart and solid play, which usually doesn't go over so well with coaches. In this one he did much better at playing within himself.

- Emmanual Addo showed the whole variety of his offensive game, and why he has the chance to be such a big-time player. He hit two threes, but also showed good fluidity and moves near the basket, finishing with 13 points and 5 rebounds. He still will make a couple head-scratching plays per game, but he has the talent to be one of the best big men in the conference, without question.

- For the Bobcats, for long stretches it seemed like Shawn Reid was their only offensive weapon. It seemed like their best plan of attack was to give it to him to take a stepback jumper with a hand in his face, which can only work so many times (though it was impressive how many times he did make that shot). He led the team with 18 points. I was excited to watch Christian Moon play, but he had no impact. He scored 4 points and finished 0/5 from downtown. He seemed to sit for long stretches, which I am not sure if that was a result of him jacking up a couple threes early in shot clocks. 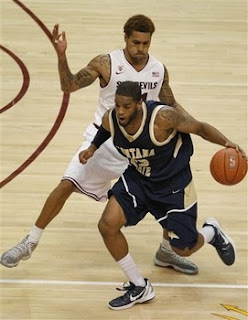 - Xavier Blount struggled as well, only finishing with 8 points. It is hard to imagine, but the game and the following thoughts on the game would have been a lot differentif Blount had made an extra free throw. With a little under a minute to play and UNC up 55-54, Blount was sent to the line. He made just 1 of 2, and it went to OT tied at 55..

- I know that MSU fans aren't very happy with Rod Singleton at PG, but there are not a lot of options right now. Michael Dison played 19 minutes but had no impact. Without Jamie Stewart, it is tough for them to find the depth to have Blount play the PG more often. It is clear they could have used Antonio Biglow this year.

- In the overtime, MSU never had a chance, as they came out lifeless. Northern Colorado scored 22 points in the five-minute period and put any doubt to rest quickly about who would win. For MSU fans, it is deja vu. Another promising start to the conference season has led to another second half collapse. They should make the conference tournament (since they play one more against NAU), but it is hard to see them making a run.  UNC still has a long way to go to make the conference tournament, but they can at least take some positives out of this one. It is tougher to find them for MSU.