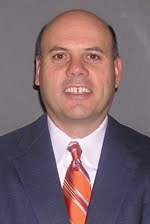 In the most shocking news of the season, Northern Arizona Head Coach Mike Adras has resigned his post, per the NAU website.

Adras was in his 13th season at Flagstaff, has 193 career victories, and was one of the most respected coaches in the Big Sky. His team has struggled this year with a very young squad, but with his track record I could not imagine that had a part in his departure. From all accounts, this came a bit out of left field, and I don't know of anyone (other than those involved) that have an explanation for the sudden departure.

Athletics director Jim Fallis announced that Dave Brown, a long-time NAU employee, will serve as interim head coach while a search for a permanent replacement is conducted.

"It's important to maintain stability in the program, and I'm confident in Dave's abilities," Fallis said.

Brown is a member of the NAU Athletics Hall of Fame and former head coach of the NAU's women's basketball team and Yavapai College men's team.

Much more to follow I am sure, and for now we wish Coach Adras the best. A search for a new permanent head coach will begin immediately, according to NAU.