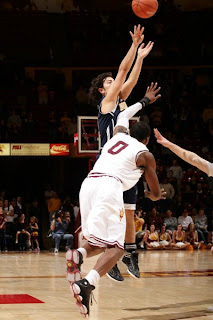 Photo courtesy of Northern Arizona News.
About 10 days ago, Northern Arizona was sitting at 2-7. They hadn't beaten a Division I team, and they were coming off of a 49-40 loss to Pepperdine. Their long-time coach Mike Adras was about to resign in a situation where all of the details still aren't known. They would promote the 70 year old radio announcer to be the head coach, and it seemed like they were the best candidate to finish last in the Big Sky.

It is funny how things change. In the first two games since the chance in coaching, Northern Arizona finally beat a Division I team with an 80-67 win over Cal State Bakersfield. Amazingly, they topped that last night, with a 69-68 victory over Pac-12 Arizona State, getting a buzzer beater from Stallon Saldivar to shock the Sun Devils.

"I had planned that we would hit it to win it and told them that," said Interim Head Coach Dave Brown of the final play. "The guy was going to miss one free throw and we were going to get our chance. That is one thing we try to do to reinforce confidence. It is important and we want shooters to shoot."

If you haven't heard the audio of the game-winner, click here.

For NAU, a couple big storylines in this game. First, was simply the brilliance of Stallon Saldivar. The junior guard's performance was sublime in this game. He shot 7/12 (and 6/8 from downtown), finishing with 24 points. He always displayed his normal solid decision-making, finishing with 9 assists compared to 2 turnovers. To top it off, he pulled down 5 rebounds. He has been counted on to the stabilizing force for them this year, and in this game he looked like one of the best players in the conference. This is certainly a game he will remember for a long time.

The other big story was the return of Gabe Rogers from injury. He didn't have a huge impact in this game, shooting 2/7 for 4 points in 15 minutes, but the mere fact that he is back on the court is huge for the Lumberjacks. He was expected to be their leader and best player this year, but then he suffered a preseason shoulder injury. If Rogers can get back to full health, he is one of the best shooters in the Big Sky (and in the country) and a huge difference-maker for NAU.

Not long ago, NAU was looking like a pushover. Now, suddenly, a three-guard lineup with Saldivar, Rogers, and James Douglas is something that no Big Sky team is going to want to face. Can they keep this up? I'm not sure, but for the first time this year, this are signs of life in Flagstaff.